What is your favorite Redskins Super Bowl Play? 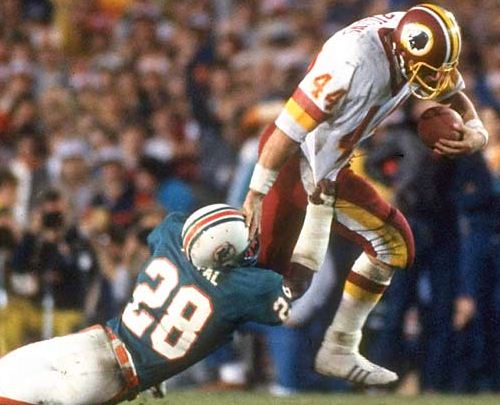 The first play of the next SB we get into. I'm done living off of our past accomplishments.
Posted via BGO Mobile Device

Great play Mike. Just not in a SB.

Riggins TD in SBXVII has to be number 1. Iconic.

Couple of others I always find myself thinking about ...

Rypien to Clark to seal SB XXVI - I remember standing up on the couch with both fists in the air for a full 2 or 3 minutes after that one. The pinnacle of the Gibbs years for me.

Theismann probably saves SB XVII - one of the most underappreciated, athletic and just plain THE MAN plays any QB ever made in a SB.

The first three superbowls were when I was a little too young; I watched the 87 game, but don't really remember it. 92 was the first year I actually watched the whole thing as it happened, and remember it.

Watching it, I agree with Om - but after the fact, and after watching "America's Game," I think the interception in the beginning of the third quarter by Gouveia showed my favorite stuff about the Gibbs Redskins: coaching. They drew up a play, and told Kurt he would get an interception. They executed it to perfection, and exactly what they planned to happen, happened. Gouveia intercepted the ball and took it to the 3 yard line or so for a 24-0 lead. Awesome!

Highlight at about the 39 minute mark: [media]http://www.youtube.com/watch?v=d-AGeNhqkgQ[/media]

I guess Riggins run is #1 with me. I like the Sanders catch and the Clark catch in the next two, so those would be all my favorites for each one.

But what's ironic about our 3 SB wins is, Gibbs was known for being an offensive guy, yet in all of our SBs, our defense actually punished the opposing QB. They didn't just stop them, but they punished them

Woodley was benched for Strock because he absolutely was getting knocked around and couldn't complete a pass. Elway was beat up and sacked 5 times. Kelly was mauled so bad and knocked so woozy, he headed towards the wrong sidelines during one part of the game.

Riggo's run, because of when/how it occurred in the game, combined with the fact that it sealed the deal on our 1st SB win, might be the biggest play in our history, with pardons to Slingin' Sammy and our 1st two World Championships, but it doesn't have to be everybody's favorite SB play. As Om already mentioned Theisman's play earlier in the game, which without, might have kept Riggo's moment from even happening.

I have said in the past, that for me, our 1st victory over the cowboys in the 72 NFC Championship, was better than 82. We dominated their asses from start to finish. And, it was the 1st.

With that in mind, I'll go against the flow, and select Mike Bass' blocked field goal return for a TD. Which, I believe, is still the only one in Super Bowl History.

Ax, I was hoping somebody besides me would remember this play. Thanks to Billy Kilmer's pass hitting the goal post instead of a wide open Jerry Smith, this ended up being our first-ever Super Bowl TD.

^^This. By a mile. I can still see it play out in my head as though it just happened. Aside from it being THE play of our first SB win it was also notable for me because my Uncle (a Raiduhs fan

) had been ribbing me all week and during the game that the NFC was "soft" and decidedly inferior to the AFC. Riggo's run put a sock in all that. Unfortunately he did get his revenge in the next SB.

i was going nuts Capital Defense...

I hate you all.

edit: I just realized I've never seen a SB from start to end. never had them on disc, and never managed to catch one when it was being replayed. I just asked for a DVD of them for my birthday from the wife. Maybe she'll get it for me...

i was going nuts Capital Defense...
Click to expand...

That's the play I was referring to - it wasn't actually a pick-6 though. Kurt only got to about the 4-yard line, then Riggs finished it off.

Riggs wasn't even touched- literally not touched on that TD. He like half assed it into the endzone. Ah the good old days.

Mine has to be the Riggo run.. couple reasons. i was there. I had had my pocket picked and had literally NO money and was depressed until things started going our way. That one sealed the deal. You'd be amazed how generous Redskin fans were to this lonely lady out of Maryland (I was by myself) to get enough $$$ to get to hotel and then to airport.

I was also at the 72 Championship game though.. LOVE LOVE LOVEd it. That's where my goalpost cover is from.

Docsandy said:
Mine has to be the Riggo run.. couple reasons. i was there. I had had my pocket picked and had literally NO money and was depressed until things started going our way. That one sealed the deal. You'd be amazed how generous Redskin fans were to this lonely lady out of Maryland (I was by myself) to get enough $$$ to get to hotel and then to airport.

I was also at the 72 Championship game though.. LOVE LOVE LOVEd it. That's where my goalpost cover is from.
Click to expand...

Very cool about the 72 goalpost cover.

My personal favorite is also Williams to Sanders. Though I'd say the most "significant" play in Skins SB history is 70 Chip...by a mile.
You must log in or register to reply here.