Sometimes a picture is worth a thousand curses

There's always next season and the next coach. When's the next owner? Hell, I'd settle for a real GM at this point although I'm not sure how much good it would do. Yeah, the D's pretty good, except for a few plays a game and that's all it takes to beat this Offense. The truly sad part is even if they fight back to .500 and finish 8-8(Again!) it wouldn't make a bit of difference. Still another wasted season and yet another new coach on the way. Despite the fact that in order to finish 8-8 they would have to beat several playoff teams and be playing better than almost every team in the NFC. All that to finish last in their division. They might even do it and wouldn't THAT be par for the course under Snyder--just plain tragic.

The more I read this season about the Redskins, the more I find myself just closing my eyes and shaking my head. I’ve been a fan for nearly 30 years and while I still think there have been times where the team has been worse, I can’t think of a time where I’ve felt worse about being a Redskin fan. Its just awful and I just don’t see it changing which makes it seem all that much more unbearable. Its a good thing faith is an unreasonable belief since that’s all that allows me to keep the faith.

fastwb said:
The truly sad part is even if they fight back to .500 and finish 8-8(Again!) it wouldn't make a bit of difference. Still another wasted season and yet another new coach on the way.
Click to expand...

Actually, I think it may make a difference. As others have said, if the Redskins somehow struggle to 7-9 or 8-8, then Danny can continue to say were just a couple of players away from being a playoff team. Then we get another cycle of offseason free agent spending, and raised preseason hopes that are dashed by mediocrity on the field. If the Redskins go 2-14 or 4-12 maybe Danny realizes the problem is not a quick fix away and will make major organizational changes (e.g., replacing Vinny). 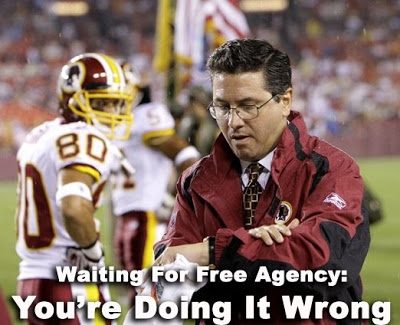 I'm afraid you're right but I just can't bring myself to hope they lose that many games even if I probably should.

fastwb said:
Its a good thing faith is an unreasonable belief since that’s all that allows me to keep the faith.HTTR
Click to expand...

Faith doesn't have to be unreasonable. In this case, it may be. But that's not always the case.

fastwb said:
I'm afraid you're right but I just can't bring myself to hope they lose that many games even if I probably should.
Click to expand...

Not to belittle your anguish, but most of us have already worked through a lot of what you've mentioned. Look through our posts from the past several weeks. Like us, you're just going to have to take that long journey through the stages.

However, you're not powerless. You can do something to save OUR team. Get up on yer hind legs and fight back. There are sites literally everywhere that support stances as varied as "Sell the team Dan" to "Fire Vinny". Links to them are scattered here and on every other fan site. Find one (or more) that works for you and start participating.

I'd humbly suggest that a great place to start would be by mailing $nyder your ceremonial fan card.

Good luck with it and again, welcome!
You must log in or register to reply here.