In this article (half way down) it mentions that Kyle Shanahan watched film on McNabb and recommended to Dad that it would be a bad idea to bring Donovan McNabb to Washington.

I haven't read this info before. Thoughts anyone?

Kyle spoke up before the trade, but others in the organization pushed for McNabb.
Click to expand...

Gee, I wonder who that could be? 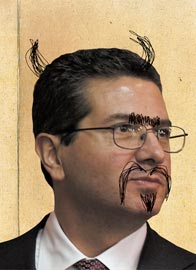 Aw Sarge, I hope that wasn't the case. Still praying there is such a thing as a new-and-improved Danny. I hope it was Bruce Allen and old Dad that overruled him.

That being said....I don't find it likely that Snyder had alot of input in the Mcnabb trade. My guess Mike and Allen overruled Kyle. I have no doubt that Kyle didn't want Mcnabb. I believe Kyle wanted Grossman and has pushed that outcome from the start.

I think this is a case of Mike Shanahan overruling his son and trusting his own experience.

That is one of the downfalls of having family working together.

If Dan Henning had come to Joe Gibbs and had a major objection to a contemplated move my guess is based on their mutual respect that Gibbs wouldn't have endorsed the move.

But father and son?

How many fathers do you know that trust the judgment of their sons before their own?

I don't think the fact that they are related has much bearing on it. Unlike Gibbs, Shanahan is stubborn. If he thinks he knows what's what - he's going to make the final decision regardless of who he's speaking to. In fact, I'm inclined to believe there would be a greater possibility he'd listen to Kyle than someone else in the offensive coordinator spot.

I wonder what Kyle thinks of Cam Newton?

This is old - there were stories/rumors of this during the season, back when McNabb was pulled against the Lions for the 2-minute drill, or even before. I will search later, but this was reported on months and months ago.

Some how I missed the other stories. I heard the rumors that Kyle and McNabb were clashing but never heard that Kyle actually recommended to dad not to trade for him.

Here is my new thought on McNabb trade in Washington... Mcnabb - Strong arm, athletic can move the pocket and throw on the run. Reminds me of the other QBs that Mike Shanahan has had over the years. However isn't Kyle running the offense? His QB from Houston (Schaub) smart and accurate, with a good arm but not a gun. So what kind of QB will the Skins be looking for? Mike's QB or Kyle's?

I've been saying that the Skins won't necessarily look for the athletic QB. They are going to look for someone that is accurate and intelligent. That is why I am high on Ponder.

I like Ponder too. The only problem is I think he is going to be a first round pick. Where would you feel comfortable taking him? Assuming we can trade down of course.
Posted via BGO Mobile Device

Be on the lookout for Greg McElroy. I think he could end up here and would be a steal for the burgundy and gold.

McElroy will go late in the draft, 5th round or so. I think that if we pick him will depend on what we do at the top of the draft. I don't know that McElroy has a strong enough arm for our offense. He is intelligent though and can take a snap from under center.

Ricky Stanzi could be available late as well. I would not mind seeing him later in the draft.

Skinsfan76 said:
I like Ponder too. The only problem is I think he is going to be a first round pick. Where would you feel comfortable taking him? Assuming we can trade down of course.
Posted via BGO Mobile Device
Click to expand...


Where he will be drafted is totally up in the air. He could go as high as 15 to Jacksonville. This group of QB's is really hard to project this year. So many teams need QBs, but all of these guys have some sort of glaring issue.

Another problem I see is there being a run on QB's before we draft in the second round. I think it is highly possible that Newton, Gabbert, Locker, Kaepernick, Ponder, Mallet, and Dalton will all be gone before we pick. That is fine, if the Shanny's do not see a QB that they like.

Normally, I would say take him at 10 if you think he is a franchise QB. Even if it is a reach, a franchise QB is worth it. Is he, I do not know? But, there is going to be a stud player at 10 that we could take or use them as bait for a trade down.

What is everyones opinion on Dalton? And Kaepernick?
Posted via BGO Mobile Device

I don't know Kaepernick from Kasputnik, but my good friend here in Houston is a huge TCU fan. He says Dalton is the kind of 'first in the building, last to leave' guy that will have success in the NFL. He'll study and work until he gets it right. He'll never be Peyton Manning or Tom Brady, but he definitely has a shot at being a Matt Ryan type guy. No flashy numbers, but great leadership and just gets the job done.

no idea. overall...this is not considered a great QB class. number 10 may be a stretch for a lot of these guys.
You must log in or register to reply here.