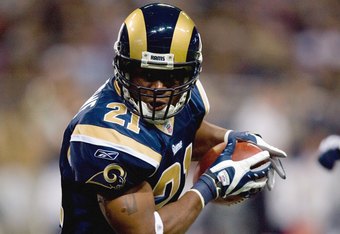 LOUDOUN COUNTY, Va. – The Washington Redskins announced today that they have signed safety Oshiomogho Atogwe (pronounced oh-SHIM-ago uh-TOG-way). Terms of the deal were not disclosed.

Atogwe spent his previous six NFL seasons with the St. Louis Rams after being selected in the third round (No. 66 overall) of the 2005 NFL Draft out of Stanford. He has played in 88 career games, with 75 starts, and recorded 470 tackles, 22 interceptions, 22 forced fumbles, eight fumble recoveries and five sacks. Atogwe’s combined 44 forced fumbles and interceptions since the start of 2006 are the most in the NFL, while his interception total over that span is tied for the eighth-most in the NFL.

In 2007, Atogwe led the NFC with a career-high eight interceptions, one of which he returned for a touchdown. He also recorded 94 tackles, two forced fumbles and one fumble recovery. Atogwe emerged as a full-time starter in 2006, when he opened all 16 games and finished third on the team with 91 tackles. He played in 12 games as a rookie, recording an interception and fumble recovery.

Atogwe played collegiately at Stanford where he was a biological science major and All-Pac-10 honoree as a senior. Atogwe is a native of Windsor, Ont., Canada, where he attended W.F. Herman Secondary School.
Click to expand... I like this signing. Moore just wasn't getting the job done. Atogwe is a ball hawk and he causes turnovers. All the needs we have we can now cross FS off the list.

I was kinda hoping we'd give Barnes a shot at FS but this signing will definitely strengthen our secondary in the short term. If we let Carlos walk and sign Nnamdi Asomugha, not only would we have a GREAT secondary but we could spit beer in laughter at Sam Huff trying to pronounce their names.

Gold, Jerry! Its gold I tell ya!
Posted via BGO Mobile Device

Barnes has too many injuries to rely on. Carlos is going to walk and I have read several teams are interested in him. Also, I do not think Asomugha is coming to D.C. He is going to demand a huge contract. Not sure that Allen and Shanny are going to be up to paying for it. Of course, it is possible.

Anyone know how physical this guy is? Tackles per season look good....but we are talking the Rams. Ball hawker in deep secondary is a definite plus.

He is not physical fansince62. That is one of my problems with him and one of the reasons the Rams did not want to pay him. He is not physical, and not a great open field tackler. However he is a turnover machine. Something we haven't had in a while. He is the best option at improving our safeties this offseason.

I am hoping that Laron Landry and Steve Jackson will rub off on him. Since we have had Jackson, our safeties have been hard hitters, even when they are not physical specimens themselves.

But more than being physical, I just hope he can come in and tackle well. If Jackson can improve his tackling then this will be a steal. Remember that his best two years came under Haslett.

Free-safeties are usually ball-hawks and not very physical - its part of the reason they are free-safeties. The more physical guys with safety-speed are usually strong-safeties, and put down in the box. Redskins fans were spoiled with Sean Taylor, one of the rare guys who was a ball-hawk but could also destroy people. Sigh.

EDIT: although ST was a beast, there were times I thought he could have been more ball-hawk and less heat-seeking missile. I enjoyed watching every second of his time on the field with the Redskins, but there were a handful of times I said to myself, "wow I wish he'd gone for the pick there instead of the huge hit." Atogwe will usually go for the pick or pass-breakup, and not the big hit.

I am not comparing him to ST though Lanky. He tries to tackle high and fails. A lot of times he goes for the strip and fails instead of making a tackle. Sometimes he just needs to tackle to save the drive and he is trying to force the turnover. The turnovers are fantastic, but sometimes a solid play is needed.

Spags moved him down in the box a lot last year. I also have a high opinion of Spags and think he knows defensive players pretty well. He did not feel that OJ was good enough to keep around. OJ wanted to stay with the Rams, or at least he said so, but from what I read the Rams did not even negotiate a new contract.

Last year when he was a restricted free agent, the Rams tendered him at the lowest level. What level is that? Right to first refusal. That's it. No other teams were interested. There is a reason. So, he re-signs a five year deal with Rams. Obviously they knew that they were not going to pay his $8 mil this year. So after signing a five year deal he is cut one year later.

He was not in high demand this year. He visited the Skins, and maybe the Bills? I read the Cowboys were interested, but were not signing anyone until after the CBA is done.

If he is the dominate force everyone believes, then why have most teams kept their distance from him when he has been dangled in front of their noses the last few seasons.

Also, and he may be healed from all this, but he has had shoulder injuries as well as a sports hernia in the recent past. I do think he was the best move for this team at this time. I am just not a huge fan. He is a serviceable stop gap for now.
You must log in or register to reply here.