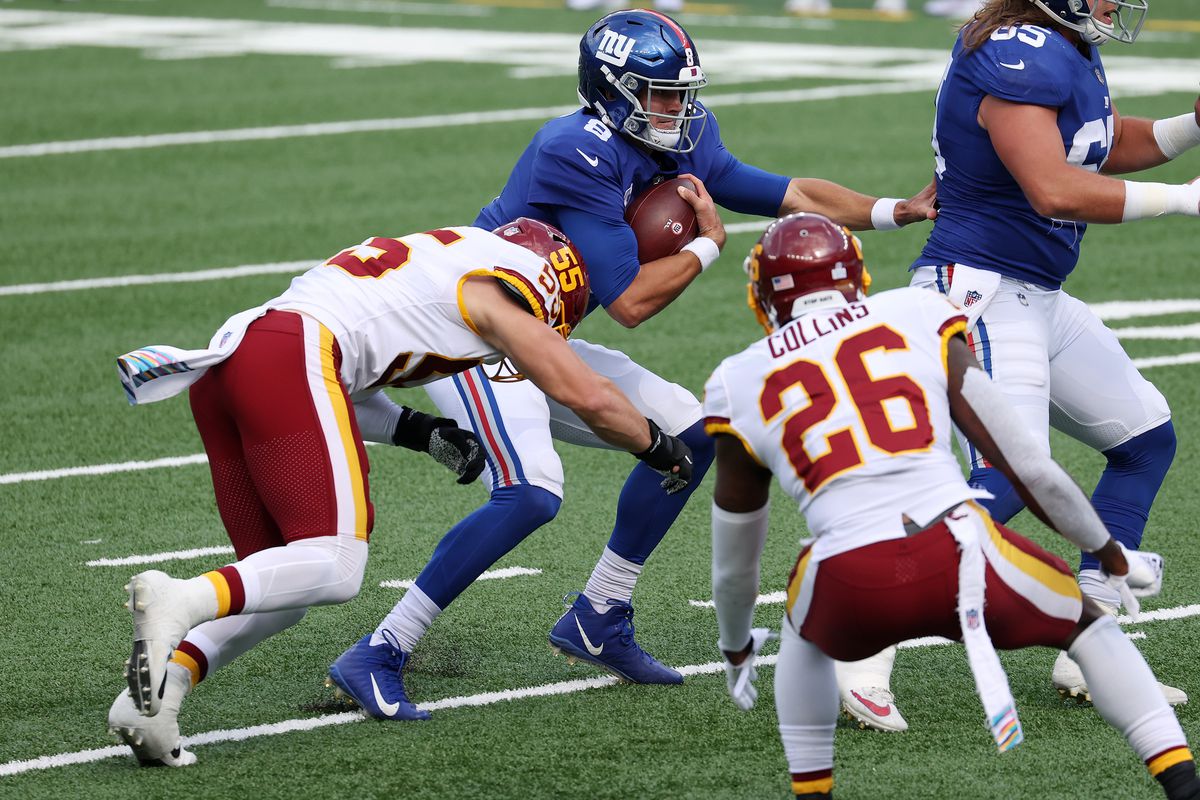 Our 2021 Week 2 matchup has Washington facing it's perennial nemesis the New York Giants at Fed Ex Field on Thursday night . The Giants looked just as hapless as Washington in their opener and dropped their Week 1 opener 27-13 to the Denver Broncos. Daniel Jones completed less than 60% of his passes in that one, and coughed up the football late in the game ending the Giants hope of a comeback. Can the WFT turn things around in a short week with a backup QB under center, against another desperate NFC East opponent who has dominated them in recent years? We're about to find out.

Currently Washington is favored by 3-4 points on most Vegas lines.

Gametime is 8:20 pm on Thursday 16 September at Fed Ex Field.

Talk about the game, before, during, and after in this thread.

Heinicke's time to shine and see if he belongs in the driver's seat with Fitzpatrick to IR. I watched some of the Giants vs Donkeys game and they looked bad, real bad, if we can't get a W here on Thursday we're in for a long season.

Danny Dimes got the wheels. It's gonna be a long night if he slips away.

He can definitely take off with it. He was the Giants 2nd leading rusher in 2020 (part of which was Barkley being out, but still...)

On the other hand he coughed it up 11 times last year using his wheels, so use away Danny. Coughed it up and cost his team a chance at a comeback yesterday too.
Last edited: Monday at 1:50 PM

SirClintonPortis that original reply of mine sounded snarky - not intended, you make a good point.

Rivera in today's presser focused on the fact that the Chargers 'didn't show their hand' because they rested all their key starters throughout the preseason.

I guess a year of tape on Justin Herbert wasn't enough for you guys to figure out that he gets the ball out quick and has scary receivers?

We rested our starters, too. Only difference is we shouldn't have. We looked foolish out there.

I mean - I get it. Justin Herbert is insanely good and they have weapons all over the offense. But just say 'they were better than us', don't put forth an implied excuse that gives your D a pass. That was the least 'Rivera-like' presser I've ever seen. I feel like he's protecting Del Rio from being criticized.

We need to have a short memory as a collective unit and start fresh this coming week. At the end of the day, we need to keep the big picture in mind. This division will be decided in December with all those NFC games to close out the year. We just need to be sure that we keep our head above water early in the year and try to get to December at .500.

Ultimately, I think this will be an interesting game on Thursday. You have two teams who hang their hat on their defensive play that both were underwhelming defensively. New York gave up 27 points, 420 yards, 165 on the ground, as well as three 4th down conversions to the Broncos. They will be out to redeem themselves, much like our defensive unit will be too.

On a short week with both teams having some question marks at QB, I can see a low scoring, ugly, defensive game materialize.

Antonio Gibson on today's injury report with an injured shoulder.

Dude seems to be a tad fragile. Toe last year, shoulder this year.

WFT should be fine on Thursday. They had 3 extra hours to prep.

Nobody on this team should be talking.

Maybe that’s where J. Davis can shine by shadowing D.Jones all game and crack him into next week if he takes off running

Hopefully we don't get out coached again.

Please, finally beat doofy face Daniel Jones!! He typically looks like a chump against the rest of the league, but an all-pro vs us. It's in his DNA to fumble and turn the ball over. Force some!

Washington -3.5 vs. Giants
We loved the Broncos laying a field goal against the Giants last week because it was a significant strength on weakness matchup whenever the Giants had the ball. That will be exactly the case for the Giants offense again this week.

Washington dropped their season opener to the Chargers, but they made life tough for an offense that comfortably rates from good to great. Justin Herbert got 7.2 yards per attempt, not including kneel-downs; the Chargers ran for 89 yards on 25 carries. Austin Ekeler grinded his way to 57 yards on 15 totes. The Chargers got just 5.4 yards per play, which ranked 20th over the full year last season. Washington’s defense wasn’t an overwhelming force in that matchup, but it more than did its job against an already-good offense that’s expected to take a step forward in Herbert’s second year.

And now it gets the Giants.

Put, I see little chance that the Giants’ offensive line can keep Chase Young, Montez Sweat and company off Daniel Jones. The Giants’ surest way to keep the Washington pass rush honest would be to deploy a fully healthy Saquon Barkley, but, likely, he’ll still be operating at less than 100%. The strongest unit in this game is, without question, Washington’s defense, and they’re playing at home on a short week.

Washington’s offense has some issues of its own. Ryan Fitzpatrick is out for multiple weeks because of a hip injury, leaving the offense in the hands of Taylor Heinecke. Antonio Gibson is expected to play on Thursday, but he suffered a shoulder injury, likely a sprain of his AC joint, last week. Curtis Samuel remains on short-term IR. It’s reasonable to be concerned about this group on a short week, as well.

Heinecke, however, was effective in a tough spot last week, completing 11 of 15 passes for 122 yards, 8.1 YPA and a touchdown. The game was played entirely within a one-score window while he was on the field, too, so it wasn’t a matter of him finding a soft landing spot. Running backs routinely play through sprained AC joints, so while Gibson could have some added pain on Thursday, no evidence suggests he won’t be his usual self. I’d play this up to Washington -5, but I am happy to lock it in at -3.5.

It was hard to watch our D give up 3rd and long after 3rd and long, and yeah, I know they knelt down in victory formation on that last possession ... but end of the day the Chargers scored 20.

We weren't the worst-producing offense this weekend:

None of those teams won either.

Several teams did way better scoring than we did ... and lost:

This was just for fun. I'm not drawing conclusions, or taking the time to look at any of those numbers in context of their game situations (garbage points, D or ST scores, etc.), just observing that generally, 16 points ain't gonna get you in the W column.

Be nice to see the TH4 Era begin with something even remotely approaching that number.
You must log in or register to reply here.

Who Read This Thread (Total Members: 18)