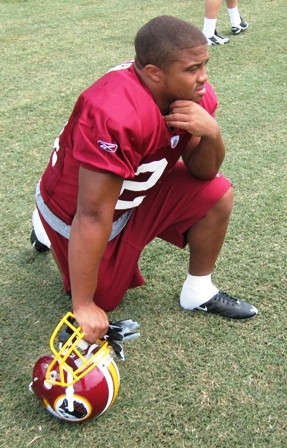 I refer to running back Marcus Mason as a fan-favorite a lot, but calling him that does him something of a disservice. The local-guy-made-good didn't just impress the fans last preseason; he led the league in preseason rush yards and stood out to his teammates, too.

Especially the Redskins other preseason star and fan-favorite: when you ask Colt Brennan about Marcus Mason, the superlatives just start flowing. "He's a natural football player," Brennan tells me, "a natural baller . I can't tell you how many times in the preseason last year it was so nice to have him, because he would make good plays, make good runs. You only get so many chances when you're young, and you've got a running back like that, gaining extra yards, picking up first downs for you, doing the little things.

"My second touchdown pass was to him," Brennan continues, barely pausing for breath. "He got me a ton of extra live reps, because he was able to extend our drives. We really had a great combination of run and pass with him in the games. He played unbelievable last year in the preseason, and he's done just as well this year, and I think everybody knows that he's a great football player."

Asking Mason about Mason earns a slightly less effusive answer, although almost any answer would've been less effusive than Brennan's.

"I'm doing pretty well," he says when asked about this latest chance. "I've picked up on the offense pretty fast. Last year I was out trying to learn it and I was worried about whether I'm going the right way or if I'm not, now I'm comfortable and ready to have fun."

And Mason understands why he wasn't able to stick last season despite his impressive statistics. "Pretty much they didn't feel that they needed four running backs," he says. "Clinton, Ladell, Rock and Mike, they didn't need an extra guy."

That logjam hasn't let up this year, either. Mason has one year of practice squad eligibility left, but there are things he's trying to do to make the active roster. "Special teams," he says bluntly. "I've got to be excellent on special teams and that's what I'm working for. Being on these other teams' practice squads, that's all I've been doing is special teams, so I feel like I'm really up on it."

Mason's not really being looked at for the kickoff return position, although he's currently stationed as the up-back there. So what he's doing on special teams isn't necessarily going to be flashy or noticeable. But that, even more than his ability to run with the ball, is what might give him a chance to make this squad alongside the established veterans.

It's a position that Brennan understand well. "There's just a lot of talent on the team right now," Brennan says, still speaking in a rush. "So he's obviously in a tough uphill battle where there's a lot of talent already in front of you but you know you're a baller too. He's just got to go in there this preseason and do the same thing he did last year, and continue to show that he's the guy we need to put in there, and good things are going to happen."Marcus Mason Tries Again originally appeared on Redskins Blog on Thu, 06 Aug 2009 18:16:00 EST. Please see our terms for use of feeds.

Sorry, but I'd be very tempted to take Mason over Cartwright right now. I'm not arguing he could match Rock's solid play right away, either as a back or on ST. He probably couldn't. We know what we have in Rock - a reliable performer who will rarely hurt our chances, but isn't going to be a consistent difference maker either. And that's all Cartwright can ever be IMHO. I see a huge amount of potential in Mason - he just seems to be a guy like Horton, who can surprise, exceed expectations, and who seems to make good things happen whenever given an opportunity.

I don't see him getting his opportunity in DC though.

It's a killer to see guys like this, the Mike Espy's of the NFL, just fall victim to the numbers game.

I watched Mason at camp today, and he did nothing to change the impression I've had of him since last year ... the guy is simply a damn good football player. Unfortunately guys like him get overlooked in today's NFL all the time because of the emphasis on measurables---size, speed, vertical jump, whatever---is so great.

What can only be measured in actual games is plain old simple football ability, and w/o the measurables, many guys just never get the chance to show it. And when they do, usually only in limited practice time and preseason, like Mason last year, I get the impression a lot of coaches and personnel guys end up talking themselves out what their eyes are telling them.

I really hope the man sticks this year. I think in addition to being a great story, he's a guy who could really help this team for the next few years.

For Marcus to have a shot, he really needs to be playing against first team Defenses in preseason to show what he can do. For once, I'd like to see Zorn throw the depth chart out the window in the first preseason game and give some guys a shot against the other teams starters to really get a good indication of who can do what.

I can't see him doing it but I think some of us hard core fans would love it.

As for Marcus' chances, Rock is gonna be tough to unseat whether Mason, Aldridge or Dorsey shines in preseason. Rock is not flashy but he's steady, dependable and a team leader. Unless he gets hurt, I just don't see him getting ousted.

Rock is also one of the big special teams guys. Having lost two of the main special teams leaders in Thrash and Khary Campbell, losing a third would be significant. I think Marcus Mason would have to show not only his running ability but that he can be a leader on special teams.

I don't see Dorsey or Alridge on the final roster. Neither seems to be even a consideration in the backfield and so far neither has produced trumpets fielding kicks in camp.

I agree that bringing back Mason a second time to me has 'earned' him at least the chance in a preseason game or two to work with the regular offense, at least in part.

To bring him back and see him excel once again against third and fourth team guys in the second half of these games is just a waste of time for everyone involved.
You must log in or register to reply here.