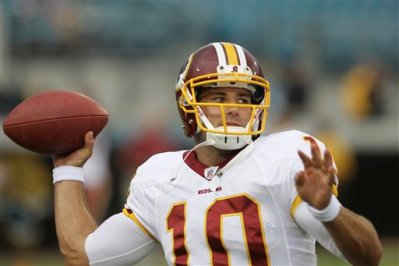 ​
Just had a chance to talk to Chase Daniel, and if he's disappointed that he's not going to be on the 53-man roster, he's not showing it, instead very much choosing to focus on the positive side of things. Mainly, he' s feeling good about the potential practice squad opportunity.

"Honestly," he continued, "I'm excited just that some kind of decision was reached, and that I'm still going to be getting paid to play football. This is just another step, and I'm going to be working even harder as a member of the practice squad, working to get stronger, to get faster, to learn the offense even better -- although I think I've done a pretty decent job of that so far this preseason."

In fact, Daniel comes across as just a naturally positive kinda guy. Even if he hadn't made the team, he notes, "I've got a lot of good tape out there now, too, which is a very good thing. Even if it's against third and fourth stringers, they're guys who are fighting to make the team too, like me, and it shows that I can compete on an NFL field."

Now Daniel has 24 more hours of waiting. During that period, every team has a chance to claim him off waivers -- with priority running in reverse order of 2008 finish, from the Lions up to the Steelers -- and only after that time is up can he be signed to a practice squad. As much as Daniel may like being here, if a team claims him off waivers, he'd be required to go -- and he'd probably want to as well; being claimed would put him on that team's active roster, which would bring more money and a better chance of moving up the depth chart.

For now, though, his plan is simple: "I'm planning to be here at the park tomorrow morning to sign the contract. Then I guess I should get out of that hotel and start looking for a place to live."Chase Daniel Talks About His Day originally appeared on Redskins Blog on Sat, 05 Sep 2009 14:41:00 EST. Please see our terms for use of feeds.

I really hate to see Daniel on the waiver wire, because I think someone's going to pick him up. I will predict that if we're lucky and no one does - he makes the 2010 Redskin's squad. I love this guy's attitude and moxie. Of course, that counts for very little in today's NFL

To be honest I think it might have come down to Daniel or Edwin Williams for the 53rd spot.

Both might draw interest off waivers.....the Skins lost Andrew Crummey off the practice squad last year and I think they think they have another diamond in Williams......somebody who could be a starter in a few years like Heyer.
You must log in or register to reply here.