Kel Varnsen said:
Boone and Om , I appreciate your perspective on actually dealing with Michaels. I never met the man and didn't know anything about him other than he sounded like a hack calling games. His Redskins Nation show was basically Redskins propaganda that ignored the very basic aspects of every game. He was insufferable to listen to and the times I got to see him on TV was even worse. I'm not sad he's retiring from the booth. But it is good to know he was friendly to those around him. Not really sure that's the case with a lot of media people.
Click to expand...

I saw him a few times at bars in Arlington. He was somewhat friendly, but not overly so. He did seem to be talking to women much younger than he. Looked a bit slimy when doing so, because they seemed uninterested. Not in any huge way, like call the police, but it just looked awkward at least. That is my recollection but it was a while ago, 10+ years ago.

Anyway, he was not good in any social interaction I observed, and on the radio he was horrible. Just sharing my own personal experience, it doesn't change anyone else's of course... it is what it is.

I only have what I've picked up on my screen but he came across as a smarmy, creepy, kinda clueless fanboy instead of the dignified voice of the Redskins Herzog always was.

As Brian Mitchell said these departures were addition by subtraction.

Mediocre talents that acted like they were senators during the Roman Empire.

Michael was pathetic on the air. Worst team voice in town. Never really worked to learn the game.

Santos and Mann were FO that no one was excited about. Santos was here since the mid-2000’s and was never recognized as being anything special.

Think Andy Reid would take any of these clowns?

The thing that always most bugged me about Leisure Suit Larry on-air? How often he’d call plays incorrectly. How many times would you hear him call a play on 1st-and-10 (just to keep the “math” simple), say the play was a gain of 7-8 yards, then come back and it‘s 2nd-and-5? Way too many per-game.

He won’t be missed. Period.

I was disappointed to hear he is all mixed up in this apparently. I never much cared for his 'take' on the Skins, but not being local, I didn't have to watch a lot of it either. Most of my exposure to him was as a play-by-play announcer which he was just 'okay' at imho. I don't know HOW he got the job but the guy was a machine when it came to team coverage. Maybe it'll turn out he was a despicable guy, although I never saw anything like that. But when I was covering the team, I was friendly with a few of the traditional media guys, notably Bram Weinstein, but wasn't hanging around in bars with team officials as a few others were. I do think, regardless of how he got the job, what his behavior was, etc... the reason Michael kept his job was because he was a frigging tireless dynamo and one man band when it came to producing content. The guy worked his ass off from all appearances, without a lot of help, and while he may not have been 'great' at a lot of it, he was 'capable' in almost every way. Those kinds of guys are hard to come by. Folks (including me) who mourned the ouster of Frank Herzog miss the point a little, because Herzog was a radio personality, nothing more. Michael was literally and almost single-handedly the entire Redskins media machine. I think he made himself invaluable with his energy and work ethic. It's a shame no one will remember anything but this. But that's the least of the reasons why this kind of behavior is so destructive.

Smallest scouting department in the NFL.

One full time employee in HR.

One guy in charge of all media as you describe.

In short, Snyder failed to staff a first class organization by spending the resources necessary.

Same deal with the failure in re the indoor practice facility for years.

Snyder only spent money on two or three name free agent signings to keep fans buzzing in May and June but he never made the investments to replicate what we had here under Cooke in the 1980’s.

Is this really true? Does it include Snyder's son, who scouted Haskins for the team?

I heard something yesterday that really clued me in as to how backwards the NFL is. Doc Walker was on 980 going on and on about how 'no one has more than a person or two in an HR department, that's all that is required'. It's hard to believe that in an organization with probably 1000 folks involved (when you count players, support staff, coaches, assistants, media and PR folks, interns, cheerleaders, etc.. etc...) would believe that 1 HR person could adequately and professionally manage the duties involved here. That's not just incompetence, it's a direct reflection of the priority Snyder puts on 'People Management' and ensuring folks are taken care of and protected in every way. You know - like every other company in America actually is concerned about. Compare that to Snyder's legal staff and I am willing to bet that it dwarfs the HR 'department' by something on the order of 10x.

The NFL is stuck in the 1930's - and sadly Snyder is just a modern day George Marshall.


- By the way, I just saw this link on Redskins.com. They may want to take it down? I don't know, just a thought. 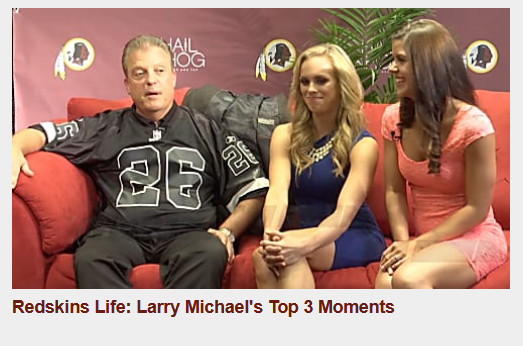 The obvious retort to comments that you only need a few people in HR for an NFL team is to then ask Doc or others why other NFL teams like the Steelers and Packers don't have these kinds of stories hit the press?

However you want to package it the Washington Redskins have a lot of issues. And most if not all of these issues come from a lack of leadership from the top.

I have been in business for 30 years and can tell within a few weeks whether a company I am working for/client organization I am engaged with has the necessary leadership in place to be successful.

The awful truth is that even if Snyder was a great human being the fact remains he makes lousy decisions on people. And this team would probably still be a perennial loser.

Jim Zorn should never have been named a head coach when he had never even been a coordinator in the NFL. The fact he was 53 years old and had not been elevated to a coordinator position told you all you needed to know about him and how Mike Holmgren thought of Zorn's promotion potential within the Seattle organization.

Bruce Allen was allowed to come close to imploding the team with head-scratching decisions and comments that only served to stir the pot and make more enemies and Snyder clung to Allen failing to realize Allen himself was a large part of the problem.

That included giving Jay Gruden 6 years as head coach when it was apparent early on that Jay was not a leader and someone players felt they could go around or even challenge publicly. Swearinger ended up being dismissed after SEVERAL public outbursts but the point is he felt he could get away with it.

Who does that to Belichick or Reid or any legitimate coach?

So, in the end Snyder being here is a problem, even without the heinous allegations that came out this week.

And again, my thoughts are that it will only be a short time before Snyder is in hot water again. He seems to attract negative consequences and tumult because he is just not quality guy. He breeds negativity.
You must log in or register to reply here.