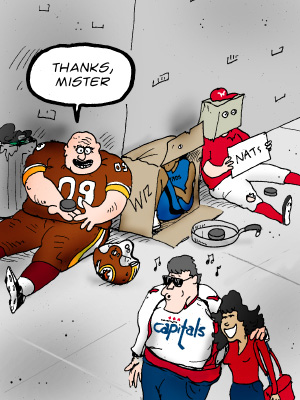 Ouch! I'm thinking it's going to be a long season...even with my apathy shields at maximum power.

could be worse....they could be on the sidewalk with the rest.

However, I find it interesting that now Ovie is here and the Caps are winning, everybody is a Caps fan and have been lifelong fans.......

bandwagoning at it's best.

However, I find it interesting that now Ovie is here and the Caps are winning, everybody is a Caps fan and have been lifelong fans.......

WD, it's only human to be that way-I can't really fault people too much for that. I recently started digging through some Redskin fan forum archives-and other similar forums out of curiosity to get a sense of fan reaction during last season-both the first half 6-2 run and the second half 2-6 collapse. Generally during the first half the Zorn/Campbell combo was the greatest thing since sliced bread, during the second half they were tar-and-feather worthy. It's just how we react to things. I don't expect everyone to react the same so I have no problem with homers or the critics either-I pretty much understand why both feel as they do. People just react differently, that's all. I'm a Redskin fan who roots for the team but tries to stay honestly aware of where the team has weaknesses as well as strengths-and why they're there and I enjoy discussing and exchanging ideas on them.

As someone who probably fits your "bandwagon" description, allow me to state our case.

2) We've always supported the Caps - but hockey as a whole has just not been that popular. I believe until recently, it wasn't even always on TV, but I could be mistaken about that. But anyway, growing up we ate, drank and slept football - hockey was sort of always "there," but never at the forefront. Also, I never really understood hockey until I saw a game live - which just coincidentally happened to occur a couple years before Ovie was drafted. Since, I've followed the Caps, and last year started watching the games whenever possible.

3) Doesn't DC loyalty count for something? I think suffering through the Norval and Spurrier years is more than enough payment, and we've earned jumping on the Caps bandwagon.

4) Alex Ovechkin is the best player in the universe, and GMGM and Leonsis have built a real solid team in DC. Its exciting, and something to watch. And lets face it - Skins fans are TIRED. Tired of the same ol' BS from Snyderrato, tired of the 8-8 mediocrity, and we need a winner. We DESERVE a winner.

Anyway, you may look down at fans like me, but I am a Caps supporter, and always have been. Just took awhile for it to fully shine through. :silly:

Always been a Caps fan, always will be. I even follow the Wiz somewhat.

The Nats are a bit of a problem for me. I'm honestly not much of a baseball guy anymore. When I was younger I used to follow the O's but there were just too many things that turned me off to baseball in general and the O's in particular (Peter Angelos) that I just sort of drifted away from the sport completely. Sound familiar to anyone? I don't think I've watched a full baseball game in years. I just don't care.

I've even gotten into watching the English Premier League over the past four or five years. My neighbor is originally from just outside of Manchester so in the interest of international relations (and since he buys the beer when we watch matches together) I follow Manchester City.

I am an Os fan for the same reason (grew up with Cal, classiest guy to ever play professional sports), but share your sentiments about baseball in general. Way to much advantage for the Yankees and other major market teams with no salary cap.
Posted via BGO Mobile Device

Let me clarify because I think I have offended some folks here and that wasn't the point at all.

I guess when I meant bandwagoning I was aiming at the people who now look down at Redskins fans because they support the Skins and not just the Caps.

I've seen it and heard it from people about how the Skins are so terrible and the Caps are so great and always have been The Team, yet you ask them anything about the Caps other than Ovie and they have no clue but they love to rub it in your face about the Skins being bad.

I'm also a DC native and I support the local teams (Wiz, Nats, Caps) but I don't follow them as closely as the Skins and I'm really glad that the Caps are doing well and that there has been a huge amount of fan support.

But there have been some people who never heard of the Caps or hockey that are jumping on board now that they're doing well and trashing my team at the same time and for them that's my point and if anything the cartoon pretty much represents that.

What, are the Caps good this year or something? When did the hockey season start anyway?

Walking Deadman said:
I've seen it and heard it from people about how the Skins are so terrible and the Caps are so great and always have been The Team, yet you ask them anything about the Caps other than Ovie and they have no clue but they love to rub it in your face about the Skins being bad.
Click to expand...

Wait, the Caps have more players than just Ovechkin?

He passed away on November 27.
You must log in or register to reply here.