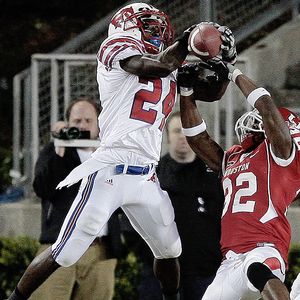 
Senior (2010): Led team with 1,301 yards for the season... Finished second in program history (fifth in C-USA) with 3,314 career receiving yards... Hauled in five passes during the Armed Forces Bowl to bring his career total to 181 receptions, which is the fourth highest total in SMU history... Caught a TD in 11 of 14 games during senior season... Second with 30 career touchdowns... Improved his Mustang single-season record with 14 receiving touchdowns in 2010... Teammed with Cole Beasley to combine for 2,361 receiving yards, which extends the single-season tandem record... Ranked 12th in the nation with 92.93 receiving yards per game.

Junior (2009): Hauled in a 96-yard TD pass in SMU's win over ECU, tying the mark for the longest pass play in school history, and finished with 125 yards receiving against the Pirates... Named to ESPN.com's Non-AQ All-Bowl Team... Was on the Biletnikoff Award Watch List... Caught nine passes for a season-high 176 yards in SMU's Hawaii Bowl win... Had another 100-yard game with 104 yards at Tulsa... Finished with 47 catches for 800 yards and five TDs on the year.

Sophomore (2008): Earned honorable mention All-C-USA accolades... Started the first 10 games, hauling in 59 passes for 1,047 yards... Hauled in 11 touchdown catches on the season, which ties for the most ever in a season at SMU... Ranked sixth in the nation with 104.7 receiving yards per game... Is just the third player in SMU history to record a 1,000-yard season... Had a streak of five straight games with a receiving TD (Tulane through Navy)... Had four 100-yard games in 2008, including a 210-yard effort at UCF - the second-highest total ever in a game at SMU - and a 186-yard game against Houston - the third-highest total ever in a game at SMU... Set another mark against UCF, pulling down a 94-yard TD reception, which ranks as the second-longest pass play in SMU history... Named to the College Football Top Ten & Pegasus News All-DFW College Football Team.

Freshman (2007): Saw time in nine games, catching 10 passes for 166 yards... Had three kick returns for 80 yards against Rice... Caught a season-high three passes at Tulsa... Hauled in a season-long 48-yard pass at Houston.

Robinson reminds me a little of Santana - has a talent for separating and being able to haul in passes right on the edges of the field and keeping his feet in bounds.


Insider The Insider
Aldrick Robinson said he brings versatility, looking to contribute as a receiver and on special teams. #Redskins

Makes me wonder if Sanatana may not be re-signed or they are preparing to move on thinking he will sign elsewhere.

Elephant said:
Makes me wonder if Sanatana may not be re-signed or they are preparing to move on thinking he will sign elsewhere.
Click to expand...

If I had to guess, I think Santana is done here. I think we will make a play for Rice, if he is not crazy expensive, and let Austin and the drafted youngsters develop with Armstrong.

Goaldeje said:
If I had to guess, I think Santana is done here. I think we will make a play for Rice, if he is not crazy expensive, and let Austin and the drafted youngsters develop with Armstrong.
Click to expand...

Prediction: He's done after this year.
You must log in or register to reply here.