LOUDOUN COUNTY, Va. – The Washington Football Team introduced its full slate of television and radio programming – along with associated talent – today ahead of the upcoming season opener on September 13th against the Philadelphia Eagles. Gamedays on The TEAM 980 AM / 95.9 FM, ESPN 630 AM and on Washington’s website – washingtonfootball.com – will begin with “Washington Football Pregame Live,” featuring NFL Network reporter, Tiffany Blackmon, and former Washington Pro Bowl wide receiver, Santana Moss. Postgame analysis will be broken down by former linebacker and member of the team’s “Ring of Fame,” London Fletcher, and The Team 980 contributor, Scott Jackson, on “Washington Football Postgame Live” through the same channels. In August, the Washington Football Team announced the in-game radio team of Julie Donaldson, senior vice president of media and content, as host and former Washington defensive captain, DeAngelo Hall, as analyst, with longtime D.C.-area sportscaster, Bram Weinstein, delivering play-by-play.

On Saturdays at 7:00 p.m. during the season, Donaldson and Washington’s head coach bring the NBC 4 audience “The Ron Rivera Show” with a cast of guests, including offensive coordinator Scot Turner and defensive coordinator Jack Del Rio, each of whom will discuss the week’s practices and theupcoming opponent their side of the team will line up against. On NBC Sports Washington Mondays at 5:00 p.m. during the season, Julie will be joined by former team cornerback and fan favorite, Fred Smoot – along with a rotating third guest – for “Go Off, Washington!” – an interactive show and accompanying podcast that will give fans the chance to sound off on the latest developments about the team. Each weekday year-round at 5:30 p.m., “Washington Football Today with Julie Donaldson” will air on NBC Sports Washington, detailing happenings at the team facility and delivering access to the players, staff and members in the football community. With news and notes from the park and around the league, the show will also discuss what is trending on social media, the journey to the team’s new name and identity and daily segments, ranging from Tailgate Tuesday to Casual Fridays, for which Julie will conduct a lifestyle interview with one of the players to discuss off-the-field interests.

Julie Donaldson said, “We have been working diligently, but quickly, to bring the fanbase unique content that they won’t only love, but that they’ll learn early on, they can’t afford to miss. I am so proud of the group I am working with behind the scenes and in front of the camera. With the expertise of both those who have played the game and those who have been digesting it from the sidelines and booths for years, we will have every aspect covered. From each down played on the field to the trends and personalities off the field, this team is ready for an exciting season.”

Damon Phillips, senior vice president and general manager at NBC Sports Washington, added, “Developing our content plans surrounding this new era in Washington football has been an exciting and collaborative experience. Julie and her team are ambitious and creative, so we know fans will enjoy the new show and the unvarnished access and forum to directly engage and participate that it will deliver year-round.”

I like the group.
Fletcher is an all time Skin. I hope he is fully healthy.
I really worry about middle linebackers that played for so long.
Love Santana. 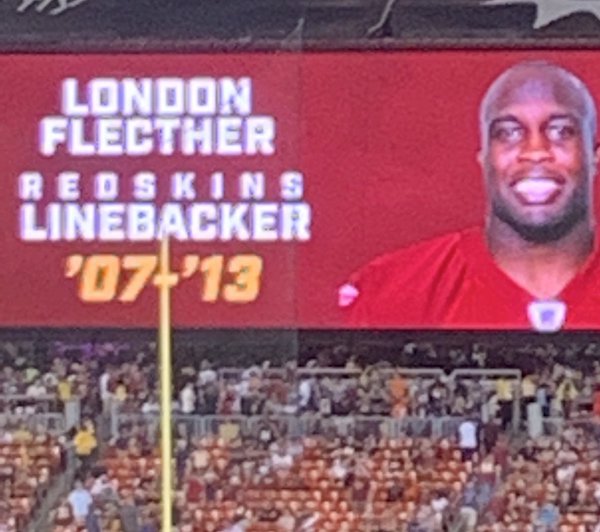 How did Moss do covering them last year?
You must log in or register to reply here.

Who Read This Thread (Total Members: 12)