Williams via his agent now crying about a lack of trade movement.


Not only is he demanding a trade, which the Redskins have granted him permission to pursue, but the Redskins need to ‘hurry up’ according to Williams and his agent.

Perhaps Williams should realize he isn’t worth 20 million a year. Maybe he needs to realize, you know, since he’s this world class talent, that the team isn’t going to give him away. So tired of this passive—aggressive act.

Somehow, he'll still have people in his corner defending his selfish, bullshit filled narrative.
Though it's beyond me as to how/why. Just another greedy lying POS.
Now he's actively trying to reduce his compensation value to the team. Friggin douchebag.

Dude did this to himself when he said "i want between 20-25 mil per". Nobody in their right mind wants to pay that.

As far as I am concerned now, he can sit out another year and not collect his check. THEN he can do whatever he wants.

"If the Redskins keep Williams, he can't hold out for a second consecutive season. Under the new collective bargaining agreement, a player won't get credit for an accrued year if he fails to report on time to training camp or leaves the team for more than five days without permission. Also, a player would be fined $40,000 per day and teams would be unable to waive that fine upon return". 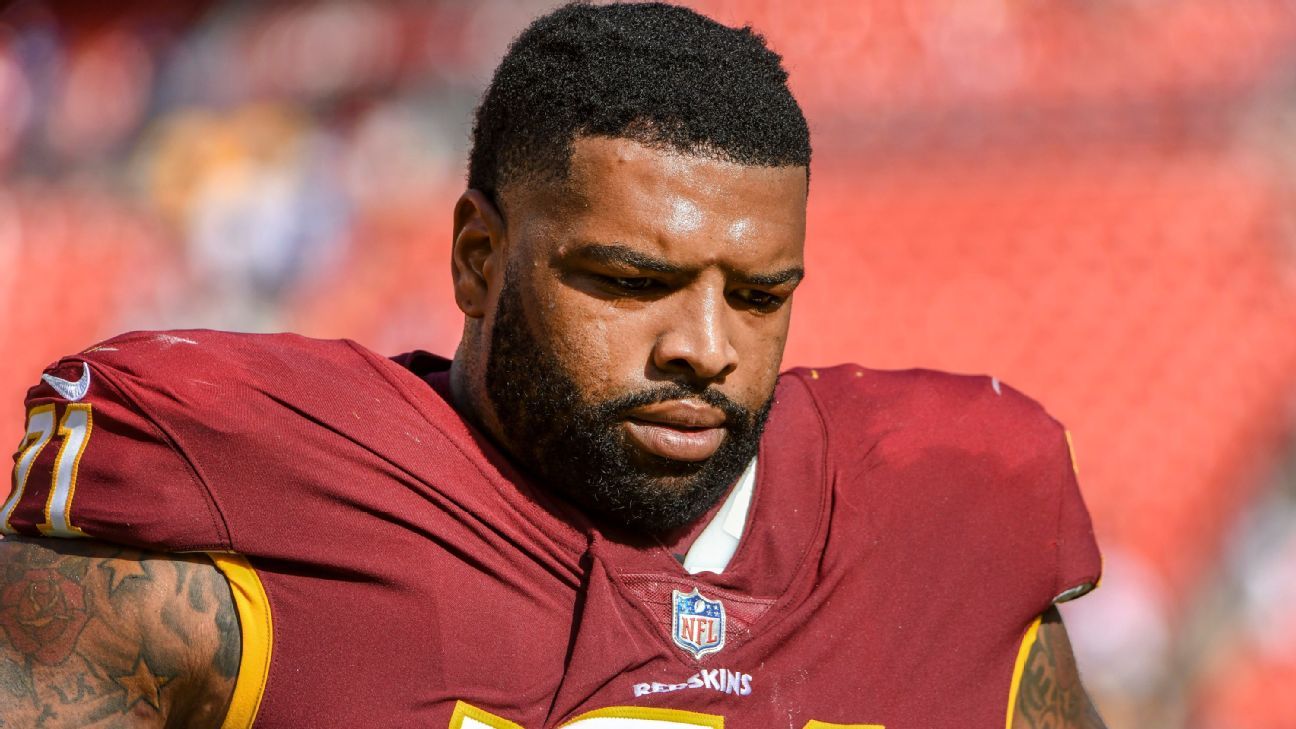 Agent: Time for Skins to trade or cut Williams

The agent for Washington Redskins offensive tackle Trent Williams told ESPN that it is time for the team to trade or release his client.

The agent is just doing what he is suppsoed to do. Notice how it has subtly shifted from organizational elements to just an ambiguous "the team"? He's boxed himself into a corner. Other than returinng as a good member of the team or lowering his salary demand/finding a trade partner......his only leverage is to return as a disruptive force in the lockerroom in an attempt to force being released outright...or retire.

Sure it will end. The team doesn't have to rush it, at this point. They can hold firm until the draft, IMHO.
At that time, you take the best offer available, and move on.

They won't do that, Ax. No less than a second rounder.

Here's my problem with that quote BB: it partially absolves TW of responsibility. I'm not willing to do that.

I totally agree with BB. The team has all the leverage. TW can find a team willing to give us a 2nd or two 3’s, accept a fair contract, or he can play for the Redskins. If neither of those appeal he can sit and get nothing.

Redskins should not change their stance because his dimwit agent is squawking.

Boone said:
I totally agree with BB. The team has all the leverage. TW can find a team willing to give us a 2nd or two 3’s, accept a fair contract, or he can play for the Redskins. If neither of those appeal he can sit and get nothing.

Redskins should not change their stance because his dimwit agent is squawking.
Click to expand...

Geez something is definitely awry today: I agree 100%. J/K....but I agree with everything you posted.

My underlying thought vis the agent has been "is that really what's going on?" Williams is ultimately responsible for his actions (whether poorly advised or not). The agent is just a tool, IMO, acting on TW's emotional responses to all of this and his chasing the greenback. WIlliams has been around for a while and knows how the system works. We already know he has other folks talking to him (e.g., Moses, AP). TW, at the moment of truth, is the guy blowing it. He is the one who played his cards weakly.

Burgundy Burner said:
They won't do that, Ax. No less than a second rounder.

Well, I certainly trust your insights more than mine. I'm just so personally done with his drama, I'd release him before I'd ever let him enter the locker room again. But that's me. I can be a class A prick when I need/want to be.

Here is what I wrote earlier today.

DeMaurice Smith is working for the NFL, not the players...how else do you explain him getting such horrible deals for the players in consecutive bargaining sessions?

With that said, this TW situation is like the Keystone Cops of contract demands. He seriously needs to fire his agent, make things right with the front office, and accept he made a mistake last year an play out this contract...or at least one more year in it.

If I'm the Skins at this point, knowing the new CBA rules, I'd tell him you can either play with and for us, or sit out and lose even more money.

As we approach the start of the new season, work in a trade to a team desperate after their starting LT goes down. If we do trade Trent, it has to be during pre-season like Asshole Allen should have done last year. Play for a season, prove you still have it and maybe you get a trade/extension for at least one more payout.

That is a risk, I know...but it's the only way we get some actual value for him. Otherwise, if we trade him before the draft, we won't get anything better than a 3rd...if we can get that at this point.

I never thought we'd get more than a 3rd anyway. Age, druggy, injured, bad locker room example, poor leader.
But what do I know?

I would not trust him being in the locker room for a second. Trying to rally teammates to his side. Screw that.

I'd rather see him crucified on a cross next to Gannicus on the streets leading to Rome.

Trent just seems to be one of those players that’s never going to mature. I’d like to see RR change the compensation to a 1st, tho I know a 3rd is the best we’ll get at this point

Ax said:
Well, I certainly trust your insights more than mine. I'm just so personally done with his drama, I'd release him before I'd ever let him enter the locker room again. But that's me. I can be a class A prick when I need/want to be.
Click to expand...

Me having a high capacity for playing the prick is why I wouldn't trade him and force him to play out his contract. Ehhhhff him!

Williams is learning his value is not what he thinks it is. He probably thinks he’s hurting the Redskins and his agent is probably feeding that side of him. Regardless of the real reason, he’s screwed himself through this. Whether he’s getting bad advice or has come up with this on his own, he’s painted himself into a corner. Whatever his end game is, he’s losing it.
You must log in or register to reply here.

Who Read This Thread (Total Members: 27)