I wanted to post this thread in excitement as we may be able to find a way to celebrate something.... but unfortunately Ashburn... well... Ashburn'd all over itself. I'm going to get the criticisms out of the way in the hopes it doesn't completely derail a milestone, but I don't have a ton of faith.

You can find a detailed list of about 10 different errors in reference to former players and coaches. 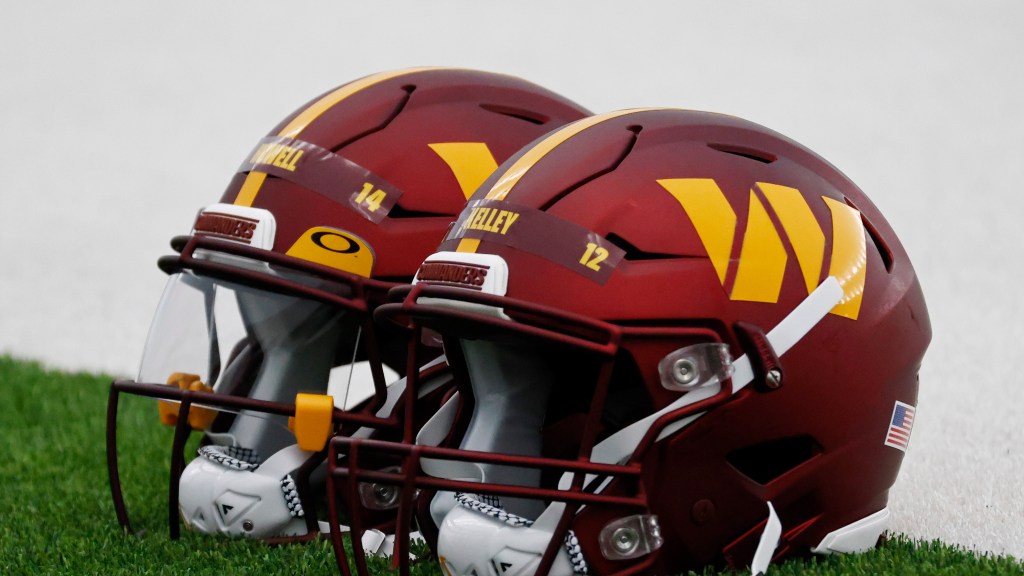 How can the Washington Commanders produce such incredible errors?

Washington celebrated 90 years as an NFL franchise Saturday — with plenty of mistakes.


Now that THAT is out of the way, the franchise is celebrating 90 years. The team has developed a commemorative patch (which I believe they will be wearing every game) as well as adding 10 more players to the "Greatest Redskins list" to bring it to 90. They also are now calling it simply "90 Greatest"

What 10 players do you think should be added?

Conspicuously I don't see Trent Williams as an option, which is kind of weak sauce...

Cooley, Fletcher and Kerrigan get my vote

I’d go with Moss and Kerrigan. The 3rd is a toss up between Fletcher and Grant. I’d lean Grant because he had an iconic play in team history.

I’m not sure about the older players or coaches. As for the rest, here are my thoughts:

Bailey - No. He made his name in Denver not DC
Hall - Possibly. was good for a while, but injuries really made his last years not memorable.
Davis - No. Not good enough for long enough in DC
Cousins - No. Mediocrity shouldn’t be rewarded, even if it got him paid
Morris - Same as Davis. Short lived and not sustained greatness in DC
Sellars - No. I loved this guy, but not really digging a FB over the other options
Lohmiller - No. Great kicker for a short amount of time, but the only kickers in the Redskins history worth notoriety were Baugh and Mosley
Cooley - Possibly. He was fun to watch, but went from great to bad and off the team in a flash

ANYBODY who holds, or has held, a major milestone to be considered.

I put Chip Lohmiller because of his involvement in the 1991 Super Bowl team, short lived career but a memorable one.

Just to be an oddball, it'd be nice to see the Hoggettes or some reference to the fans in the ring of honor or 90 greatest. If he's not there maybe Frank Herzog, too. Sometimes, the people off the field were the most iconic parts of the moment/game.

I've always been partial to Sellers. Both Big Mike's, both played fullback. He was an absolute beast out there and smashed anyone who got in his way.

I loved Cooley the guy. But, as a player I always thought he was good not great. His career just never blew up like I thought it would.

I voted kerrigan, Fletcher, sellers, chip. I should have voted Grant, too.

They went back and added Trent and RG3 today. The fact that it appears they completely forgot about Trent is really bad, but to also add RG3 just makes it worse.

It gets to a point where doing this thing every 10 years becomes an exercise in just randomly adding 10 names and is pointless and leads to too much recency bias. The Ring of Fame is more selective and more a representation of true greatness, IMO.

He had one amazing year and then nothing but drama and injuries. Good gosh they're scraping the bottom of the barrel with that one.

Yeah, the RG3 thing has to be a joke. Why not include Ramsey, Campbell, Shuler, and Haskins?

Adding Griffin to the list does nothing but serve as another reminder of just how bad things have been in Washington for the last thirty odd years or so.

I can appreciate the idea of adding new names to the "Greatest" list, but pushing it to 90 for the sake of celebrating the franchise's 90th season to me means that we are going to be some adding guys for the sake of adding guys - especially given the team's mediocrity over the past several decades. I voted in this poll, but honestly, after I got past the fourth guy or so, I thought it was a stretch and that I was reaching.

MikefromOH said:
I've always been partial to Sellers. Both Big Mike's, both played fullback. He was an absolute beast out there and smashed anyone who got in his way.

I loved Cooley the guy. But, as a player I always thought he was good not great. His career just never blew up like I thought it would.

I voted kerrigan, Fletcher, sellers, chip. I should have voted Grant, too.
Click to expand...


I believe i left it open to edit, so you can add him.

What a sad state of affairs this list highlights.

They should have included a nod to the remaining fans.

Jeez Louise, what a mess.

There are a few names there that should be on the list. Kerrigan and Fletcher for me.
Not having Trent on there seems petty.

As for Kirk... controversially, I'd rather have RGIII on there than Kirk. Yeah Kirk may have set that record, but the last truly electrifying year we had was 2012. I still think we'd have beaten the Seahawks if not for RGIIIs injury. Who knows how far we'd have gotten.

But if we're throwing QBs on there for one year achievements, then I'd rather throw Alex Smith onto the list. I'm still in awe of what he acheived in the B&G even if he was only here briefly. I'd rather reward that than the dysfunction Kirk and RGIII brought to the table.

(Honestly...none of them should be on the list in my view. Just sayin')

Looking at this list, it's also missing Timmy Smith (nod to the milestone argument) and Alvin Walton?

Pierre Garcon and Nick Sunberg are a couple other names that could have been options.

I can think of about 10 more guys that are on the same level as a few of the people on this list...

Doug Williams and Timmy Smith weren't really that good to me. Timmy had holes made for him that anyone could grab through...

Doug had the best OL and the best wide receivers out there. Outside of that one quarter in the super bowl I wasn't ever overly impressed with him.

MikefromOH said:
Doug Williams and Timmy Smith weren't really that good to me. Timmy had holes made for him that anyone could grab through...

Doug had the best OL and the best wide receivers out there. Outside of that one quarter in the super bowl I wasn't ever overly impressed with him.
Click to expand...


I think SuperBowl MVP gives him an auto bid though.

I only said Timmy Smith because looking at that list, he's as accomplished as some of the others. I don't necessarily believe he's 'greatest worthy, but it's also been slim pickins for the last 10 years

I'm confused. I looked all over the Washington rosters from the past 10 years, and I can't find Slim Pickins...

What position did he play?

The last fifteen years have mostly been the Bruce Allen era. Very few "greats" We did have some "goods" I'd say Cooley, Moss, Garcon, and Portis are in the good (not sure if any of them are in the 75. The tackles Samuels and Williams were very good. Though I surprisingly didn't see that much of a drop off post-Trent Williams. Quarterbacks....? Nah. I agree with the Kerrigan nod. It's crazy that neither Arrington or Orakpo get near the cut (at least not in my book.)

I guess we could always include James Thrash, Ryan Grant, and Rock Cartwright. Each of them were try-hard guys who maxxed out their meager talent. But seriously, I think the idea of forcing 15 doesn't do us much good. This team peaked at mediocre during that stretch and mostly were below average to awful.

The only way to really get fifteen is to dig deep into the 30's, 40's, or 50's or celebrate more of the championship era players. The other way is to celebrate 15 off-field greats. RFK was a Redskins' Great. Pez and Huly were/are Redskins Tailgating greats. The "We want Dallas" chant? That was great. The song "Hail to the Redskins!" that was great!

The other thing is that this isn't really year 90. It's not even 90 years in Washington. It's really year 1 of the Commanders. By pretending it's the 90th, it like having their cake and eating it, too. We are now Commanders now. The glory years will always be special for me, but it's not hard to imagine that that chapter is gone. Heck, really that book has been closed. Maybe it makes sense in the first year of the Commanders to give homage to everything that once was Redskins, but the Commanders are not a continuation. Riggo was never a Commander. Neither was Monk, the Hogs, or any of the Redskins I remember dearly.

I mean seriously, do the Baltimore Ravens ever break out their old Cleveland Brown uniforms and wax nostalgic?

The saddest part was that even if the name were not changed this would still be a shitty exercise.
You must log in or register to reply here.