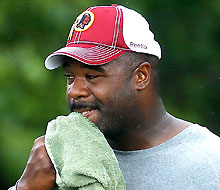 ASHBURN, Va. – If Albert Haynesworth believed he could spend seven months challenging the icy will of Redskins coach Mike Shanahan then expect to be forgiven, he learned the futility of that hope halfway through a fitness test he would not pass on Thursday afternoon.

Few men in the NFL can carry a grudge like Shanahan, who harbors resentment behind a forced smile. Valued assistants and longtime colleagues tell of their relationships with the coach in hushed whispers. Some have begged not to be interviewed. They value the coach’s knowledge, admire his obsession for detail. But they also fear him. Even long after they have stopped working with him their words quiver when his name is raised. Some say they fear they might say the wrong thing. They don’t want to cross him.

He is a man who does not forget.

And after Haynesworth used the winter, spring and half the summer to defy Shanahan, refusing to attend his minicamps and OTAs and conditioning sessions because he didn’t want to be a part of Shanahan’s new 3-4 defense, he finally came back to the Redskins this week. Whatever leverage he had was exhausted, his attempts to embarrass his new coach into dealing him had failed. He had no choice but to return to practice. 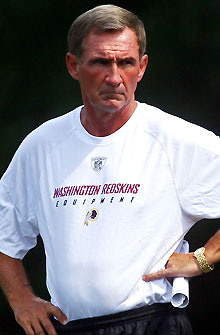 “There’s a conditioning test he’ll go through,” Shanahan said on Wednesday, the day before camp started. This was a Shanahan invention, officially administered to Haynesworth because he missed a percentage of the offseason workouts, unofficially because he tried to embarrass Shanahan.

Haynesworth should have understood right then he would not pass the test. Despite Shanahan’s insistence it was a “basic” fitness exam, the test was made to fail.

Shanahan refused to reveal the details of the test but it involved lots and lots of running in temperatures that pushed through the 90s in a sticky, swampy muck. Haynesworth, who supposedly shed 40 pounds in the offseason working out with a personal trainer, had no chance.

So he was banished to a solo workout on a treadmill on Thursday as the rest of the team practiced outside. Later, after practice was over and the fans were heading toward their cars, he was dragged out for a scramble around trash cans on a far-off field. When he was done he was forced to jog a gauntlet of fans, past the media and back into the safety of the locker room.

Predictably, he did not speak to anyone during his walk of shame.

There is a long list of former players and bosses who have endured Shanahan’s wrath, including Raiders owner Al Davis, who fired him, and once-acclaimed receiver Ashley Lelie, who never played well for him in Denver. Then there was one-time Broncos guard Montrae Holland, who rewarded Shanahan for a contract extension by showing up 20 pounds overweight at the start of training camp in 2008.

Like Haynesworth, he was quickly banished from practice, forced through a cocktail of punishments including the treadmill, elliptical machine and stairmaster. When he was done, he had to run outside just like Haynesworth. After a few days he was allowed to return to only one of the team’s two daily practices. A starter the previous season, Holland could only play for the scout team during that workout. Later in the day, he was forced to run alone on an empty field.

His exile lasted two weeks. He lost his job and not long after he was traded to the Cowboys.

Late Thursday afternoon, Shanahan seemed to revel in his revenge over Haynesworth. He smiled as he stepped onto an interview stage.

“I bet I can anticipate the first question,” he said.

When that first question was, of course, about Haynesworth, he laughed.

Haynesworth will have to take the test again on Friday, he said. And if he doesn’t pass it – a likely possibility given Thursday’s result – he’ll be shipped off to the treadmill once more.

“It may take two or three days or it might take a week,” Shanahan said.

Yet when asked to adhere to his new coach’s plan for him, Haynesworth refused, choosing to scorch the earth.

And so on Thursday he ran.

And became just another man who challenged Mike Shanahan and lost.

Love it. Finally there are consequences at Redskins park for not being part of the team - haven't been consequences since Schotty was here, and since Gibbs I before him. Gibbs II was softer than his first term, I think.

I don't care how the rest of the season goes, I love this guy. Just for this.

It's about damn time

Edit: Never mind. I have said my peace elsewhere.

yea..I know...it all worked out so well for Shanahan his last 9 years in Denver...didn't it? anyone pause to consider this? in the end....no matter how you cut it...he was fired for failure to perform. what were the contributing causes? make a short-run point....but lose the focus on long-run objectives. come to think of it.....he just might be the perfect Redskin FO man!!!!!

fansince62 said:
yea..I know...it all worked out so well for Shanahan his last 9 years in Denver...didn't it? anyone pause to consider this? in the end....no matter how you cut it...he was fired for failure to perform. what were the contributing causes? make a short-run point....but lose the focus on long-run objectives. come to think of it.....he just might be the perfect Redskin FO man!!!!!
Click to expand...

In his last 9 seasons (your metric, not mine), Shanahan has won 90 games compared to 62 for the Redskins (their past 9).

I think whatever Shanahan has been doing is working.

MikeSr619 said:
how much of Shan's record has to do with the division as well? The AFC West was filled with people like Ryan Leaf, Jamarcus Russell and the Chefs..
Click to expand...

The Chefs of the Shanahan era certainly don't compare to the Schottenheimer "glory days" (hah), but they weren't terrible. And as far as the Raiders, they were the best they've been since the 80s during Shanahan's tenure (2000, 01 and 02), including losing the SB to the Bucs. The Chargers were garbage (until 2004), I'll give you that, and the Seahawks were pretty mediocre also (the 4 years they were in the division).

I see where you're coming from, but I think Shanahan still deserves the credit. Skins had the Eagles and Cardinals to whoop up on in the 80s, but nobody takes that away from Gibbs.
You must log in or register to reply here.