His reception total is 13th on the all-time list, while his receiving yardage total ranks 22nd.

“Keenan is an outstanding addition to our coaching staff. He has all the attributes that you look for in one to become an outstanding coach in the National Football League,” Redskins executive vice president/head coach Mike Shanahan said. “Keenan has instant credibility with our players as someone who played in this league for 17 years, won two Super Bowls and played in multiple Pro Bowls. He will be able to pass along much of the knowledge and expertise he picked up throughout a great career.”

Upon finishing his playing career, McCardell began coaching by completing a Bill Walsh Minority Fellowship with the New York Giants during the team’s 2009 training camp. He also recently coached the West’s wide receivers in the 2010 East-West Shrine Game.

McCardell was drafted by the Redskins in the 12th round of the 1991 NFL Draft out of UNLV. He spent his rookie season on injured reserve for a club that would win Super Bowl XXVI.

McCardell came full circle by also playing his final season for Washington in 2007.

In between his two stints with the Redskins franchise, McCardell played for five other teams, most notably a six-year stretch with Jacksonville from 1996-2001.

Following his rookie campaign, McCardell landed in Cleveland, where he would play the next four seasons (1992-95). In his final year with the Browns in 1995, McCardell emerged to record 56 catches for 709 yards and four touchdowns.

The following offseason, McCardell became a free agent and signed with the Jacksonville Jaguars. During his Jaguars career, he caught 499 passes for 6,393 yards and 30 touchdowns and earned his first Pro Bowl selection in 1996.

McCardell signed with Tampa Bay in 2002. That season, he helped the team win Super Bowl XXXVII.

In 2003, he was selected to the Pro Bowl for the second time after registering 84 receptions for 1,174 yards and eight touchdowns.

From Tampa Bay, McCardell moved on to San Diego where he spent three seasons (2004-06) before playing his final year in Washington. 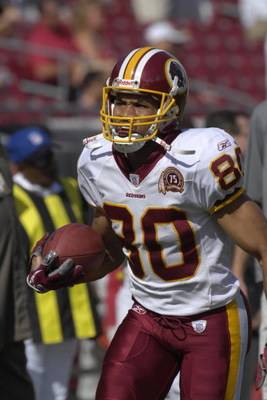 Given the slow development of Thomas and Kelly and the lack of integration of other younger WRs like Mitchell into what was a moribund offense, the Redskins can't help but get better here at WR coach.

We weren't getting ANYTHING out of this position the past 2-3 years.

McCardell remains confident in returning starter Santana Moss while Moss recovers from a knee injury. McCardell spoke from experience when discussing Moss, his former teammate. He said Moss can actually use the time off the field to learn, and that what he observes will help when he's at full speed on the field.
You must log in or register to reply here.