Why your Chris Cooley is still good

Why your Chris Cooley Jersey is still good

In today’s NFL a lot of jerseys end up at the bottom of a drawer, boxed away in the attic or closet or taken to Goodwill / Salvation Army as players leave via free agency for big $$$ or are just a bust. I think it is safe to say for those of us who have bought Chris Cooley Jerseys we can still wear them now that he is gone and not be embarrassed.

•5th all-time in Redskins receptions
•1st for Redskins TEs
•3 TD Game vs. Dallas in 2005.
•8 year with the Redskins which is pretty long for today’s NFL
​
•One of the faces of the Franchise during the Gibbs II Era and after

He probably won’t end up with a bust in Canton, Ohio but he will probably go in the Redskins Ring of Honor. Yes my fellow Redskins Fans it is still safe to wear your Cooley #47 Jersey because he is a Redskins Great! 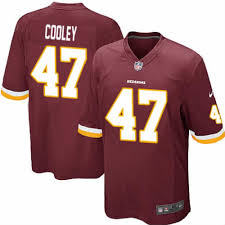 Agreed. I just told my wife this the other day.

To be fair, she's wanted (and is getting) a kerrigan jersey for a long time. But there is (in my mind) absolutely no reason not to continue to sport a cooley jersey if you have one.

I'd never be ashamed to wear my Cooley jersey. He'll be back with the organization is some way shape or form.

Well hopefully, he'll be back in a couple of weeks.

Ax said:
Well hopefully, he'll be back in a couple of weeks.
Click to expand...