Well, here we are guys and gals. The big day is finally upon us. Billions, yes BILLIONS of people will have the opportunity, at least, to view or listen to this football game.

It struck me just a little while ago that this game has created many great images. It's been the source of pictures that will live forever in sports history; but not just a handful of the game; but all 43 (soon to be 44) games played have had at least one photo that has come to define the game.

This is Max McGee catching a pass. Unimpressive? Yes, especially when you consider his performance in said Super Bowl; but if you'll look in the background, you'll see something you may never see again in a Super Bowl: Empty Seats. Thousands of seats at the LA Coliseum were vacant for a game that no one really knew what to do with at the time. It was the first game of it's kind and the public was still unsure about it. 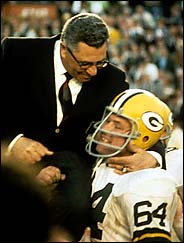 Lombardi retired after the win only to return to the R4edskins as we all know.

That Super Bowl followed the famous Ice Bowl of December 31, 1967 where Bart Starr ran a quarterback sneak for a TD with 16 seconds behind the block of Kramer who might actually been offsides on the play.

As Kramer related in his book about the 1967 season Instant Replay, he had seen on tape that Dallas defensive takle Jetro Pugh held himself high and told Lombardi that if they were going top wedge a tackle they should wedge Pugh. Here is a video from the ice bowl. Kramer's block is at the end:

Earlier that week, brash young quarterback Joe Namath spat in the face of the "establishment" Colts by guaranteeing a victory on Sunday. Namath made good on his guarantee and when the final gun shot into the air, Namath ran into the locker room and put up a single, defiant finger symbolizing what he had just done. Thankfully for NFL Films and NBC, who broadcast the game, it was his index finger. The Jets were on top of the world and were the undisputed world champions.
You must log in or register to reply here.