Perfect examples:
3 missed FGs by a normally solid kicker
Vincent Jackson kicking the challenge flag. Hmmmm....brings back memories of Tre Johnson or Michael Westbrook throwing their helmets or getting some stupid personal foul in a close game costing us.

I have to admit, Norvel has far exceeded any expectation I had when he took over a well disciplined Super Bowl contender from Marty. Last year he took them to the AFC Championship game and this year they entered the playoffs, arguably, the hottest team in the NFL having won 11 straight. All along I have been waiting for the wheels to fall off the bus!

I think this game is the beginning of the end for him.

With Norv, it's like you're just waiting for the inevitable, meaning a decent team that just physically and mentally collapses when it counts. With any other coach, I'd give reasons for something like this happening, such as the inability to know your workhorse RB was going to crap out this year. But with Norv, I think its just bad ju ju 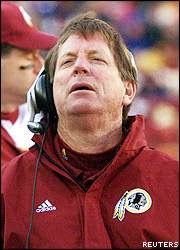 MikeSr619 said:
charger fans are still in denial about norv. i had one guy tell me he actually thought norv deserved the coach of the year award.

kaeding has now cost the chargers 3 different playoff games against the jets. he has by himself cost them those games. THREE!! PLAYOFF!! wow...
Click to expand...

SAN DIEGO -- Like it or not, Chargers fans, coach Norv Turner will be sticking around for four more years.

The Chargers announced Monday night that the oft-maligned coach is getting a three-year contract extension through 2013.

The extension came just more than 24 hours after the Chargers were shocked 17-14 by the New York Jets in the divisional playoffs, renewing calls by some fans for Turner to be fired.
Click to expand...

MikeSr619 said:
you dont think its a little weak of him to continue to cost them playoff wins by missing? its simple math. 3 FGs = 9 points. that makes it a win for the Chargers. 3 years he has done that against the jets.
Click to expand...

I can do the math, Mike, thanks. However 3 more touchdowns (even if Kaeding misses the extra points) = Chargers blowout win. All I'm saying is, yes the kicker failed to the extreme, but you can't pin ALL the blame on him.

did you show this much patience towards suisham?
Click to expand...

Yes. I have never once said that any loss was ALL Suisham's fault. I have been pretty consistent in my criticism of the entire team for sucking. Except Fletcher; I don't think I've criticized him once.

The San Diego Chargers Logo is More than a Logo.

Mike, I think you may be missing the point. The Gridiron Gods chose Norv Tuner as their plaything a long time ago.

Seriously. Had the silly skinny little kicker actually, you knowm, made any of those field goals, They would have

... had one of the offensive linemen jump a microsecond early so the kick would be negated by a motion penalty and the guy had to try again, at which point of couse he'd miss, or

... allowed the Jets to return the subsequent kickoff 108 yards for a touchdown as time expired (which TD call only stood after a 10-minute instant replay review of whether the man stepped out of bounds) or

... an earthquake would have hit San Diego right at that very instant and wobbled the goalposts so that one of the uprights leeeaaannneeed in just at the last split second and deflected the ball, or

... a huge alien spaceship would have entered the atmosphere right at that instant and the atmospheric change would have knocked the ball down short or at the very least distracted the zebras so they missed it and of course the electronic disruption would have disabled all the replay cameras so the guy had to kick it again, at which point, well ...

MikeSr619 said:
so because he missed 3 FGs you are going to say that the offense should have scored more so it wouldnt have mattered? Talk about not making someone take responsibility for their actions...man. I want you as my defense lawyer when I commit a crime. Maybe we can convince the jury that if my 8th grade art teacher didnt let me near the model glue I would have been ok.
Click to expand...

Yes, that's what I'm saying. He doesn't deserve all the blame.

EDIT: Read carefully Mike, I said he doesn't deserve ALL the blame. Meaning yes, he gets some grief for missing 3 field goals, but doesn't the offense deserve grief for not putting more touchdowns on the board?
Last edited by a moderator: Jan 20, 2010

What they do WORKS!

Everyone knew Norv's team would find a way to blow it, and sure enough they did. There was never a doubt in my mind about it. The fans in San Diego will come to know our pain in time, oh yes.

The thing I find most disappointing about Norv's career at this point is that he was never hired by the Cowboys as head coach. I guess I can hold out hope. One day....one day....

Hog Fever said:
What they do WORKS!

Everyone knew Norv's team would find a way to blow it, and sure enough they did. There was never a doubt in my mind about it. The fans in San Diego will come to know our pain in time, oh yes.

The thing I find most disappointing about Norv's career at this point is that he was never hired by the Cowboys as head coach. I guess I can hold out hope. One day....one day....
Click to expand...


I think we can all agree that Wade Phillips looks to be the next best thing!

Well Norv is up to his old tricks again. He's got the #1 offense and #1 defense and still manages to lose. This week more bungling and poor special teams. Typical of a Norv Turner coached team.

This is about the time of year when his teams make a run. Let's see if they can do it again. I wonder how many more times this will happen before he loses his job again.

One interesting stat on the Chargers I checked out-they are tied for second worst in the league in turnover ratio at -7 with the Cardinals, only the Jaguars are worse at -10. They've committed 15 fumbles and lost 12 of them (!)

That ain't helping either.

Well I see Norv has successfully managed to turn the 13-3 team he inherited into mediocrity personified. He took one of the most talented teams and managed them into missing the playoffs...brilliant!

But I'm sure they really "competed."

To be fair to Norv, their primary weapons at WR were Legedu Naane, Malcolm Floyd (for about 5-6 games) Patrick Crayton, Seyi Ajirotutu and Kelley Washington until week 12 when VJax came back, and promptly reinjured himself. Ryan Mathews seems like a bust, and Sproles did not play like he has in recent years. They needed an MVP-type season from Rivers to even be competitive.

Their defense really fell off this season, which is Norv's responsibility as HC, but he doesn't have anything to do with the D, really.

Ratings wise they've been terrific, but they gave up 27 to the Seahawks, 63 to the Raiders in 2 games, and 34 to the Bungles. 4 very winnable games, that would have them solidly in playoff contention if they'd won just half of them. I don't remember those kind of performances against inferior teams in previous seasons. I guess "fell off" was a poor choice of words; maybe I should have said their D let them down in key games.

Nice little comeback from Norv here, I was impressed...

The New York Jets were hoping for a quiet few days after last week's headline-making turmoil, but coach Rex Ryan ended any chance of that Wednesday by starting a war of words with San Diego Chargers coach Norv Turner.

Ryan, preparing to face the Chargers Sunday at MetLife Stadium, inadvertently took a shot at Turner in a conference call with the San Diego media. Ryan, who interviewed for the Chargers' head coaching position in 2007, was asked how he might have fared if he had been hired instead of Turner.

"Well, I think I would have had a couple of rings," Ryan said with a laugh. "I'm telling you, those teams were loaded. There's no question about it. But things happen for a reason. Obviously, Norv Turner has done a great job there, and A.J. (Smith) and everybody. That's a great franchise, and he's probably the best guy for the job at that time."

Ryan evidently realized his comments could be taken as a slight toward Turner, so he called his counterpart to clarify his remarks, according to a Jets spokesman.

Turner, addressing the situation later Wednesday, fired back at Ryan after confirming that the Jets coach had called.

"I hadn't seen his quote and I was a little bit surprised by the call, and after I saw the quote I didn't have the chance to ask him this, but I was wondering if he had those rings with the ones he's guaranteed the last couple of years," Turner told reporters in San Diego, taking a blatant shot at Ryan's endless stream of bold predictions.
Click to expand...

http://espn.go.com/new-york/nfl/sto...ote-san-diego-chargers-norv-turner-fires-back
You must log in or register to reply here.