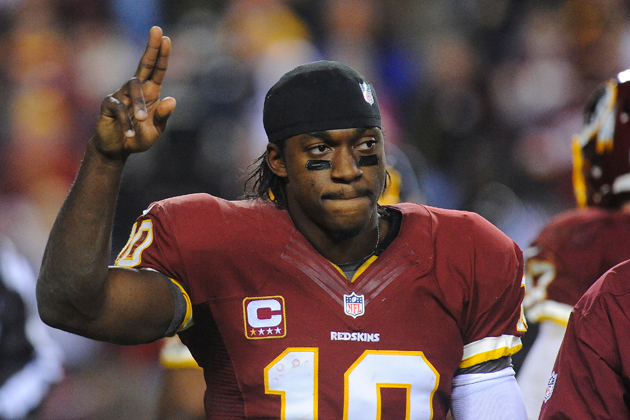 In 2012, Robert Griffin III was even better than you think​

The 2012 NFL season may have given us more impressive performances by first-year starting quarterbacks than any previous season in the league's long history. Andrew Luck, Robert Griffin III, Russell Wilson, and Colin Kaepernick all took their teams at either the start of the season, or at crucial times down the stretch, and redefined their offenses to a historic degree. Luck took the Indianapolis Colts, 2011's worst team, to the playoffs, and he was anything but a "game manager." He attempted more deep passes and took more pressure than any other quarterback. Griffin cost the Washington Redskins first-round draft picks in the next two years, but he proved to be worth that price when he took his team's formerly moribund offense into the vanguard of the NFL's new option attacks.

Russell Wilson wasn't expected to start when he was drafted -- that's what happens to a third-round pick who was dinked by front offices because of his height -- but he had a similarly transformative effect on the Seattle Seahawks' offense, and tied Peyton Manning's rookie record for touchdown passes while bailing out of the pocket more often than anyone else at his position. And Colin Kaepernick of the San Francisco 49ers took his team to the verge of a Super Bowl win in his 10th professional start (yes, dear commenters, we do know that he was not a rookie in 2012 ... but he was a first-year starter), with an offense that turned out to be uniquely and perfectly suited to his strengths.

Four young men who have done the unexpected, and raised the level of expectation for rookie quarterbacks to a ridiculous degree. Now that their performances are in the books, however, all four of them are facing the same tough question:

What do you do for an encore? We've explored how Luck's second season might be different -- now, let's go under the hood with Mr. Griffin and see what might change in 2013.

The effect that Robert Griffin had on the Washington Redskins in his rookie season can be summed up with one question: How many rookies in NFL history have had an entire offense tailored to their specific attributes? Because, make no mistake, what Redskins head coach Mike Shanahan and offensive coordinator Kyle Shanahan put on the field in 2012 didn't resemble anything we'd ever seen from the storied Washington franchise, and it didn't really look much like anything else we'd seen in pro football ... well, ever.

Last regular season, per Football Outsiders' game-charting metrics, Washington ran the Pistol formation 320 times, more than all other NFL teams combined. The Shanahans augmented that short shotgun, multi-back look with a dizzying array of tight end sets and motions that kept every opposing defense on its heels. Mix in Griffin's demon speed and freakish deep accuracy, and you had something that was just about unstoppable when it was humming. The knee injuries Griffin suffered in his rookie season had some spinning the narrative that this was another gimmick quarterback who was about to get his comeuppance at the hands of the NFL, but that's a grossly inaccurate oversimplification. Griffin didn't complete 72.4 percent of his passes and lead the NCAA in yards per attempt at Baylor in 2011 because he was the beneficiary of a few splash plays. Whether he was throwing a deep post to Kendall Wright at Baylor or rocking the New Orleans Saints with a drag route to Pierre Garcon in his professional debut, Griffin had to impress anyone who actually watched tape of him playing the position.

And that's what makes Griffin truly dangerous as a quarterback: If the Shanahans do decide to either scrap or alter their overall game plan for Griffin to make him more of a pocket passer and less a shotgun runner, Griffin's first-year numbers indicate that he's already well on his way to success with that idea. In 2012, no quarterback had a higher DVOA (FO's opponent-adjusted per-play efficiency metric) than Griffin when he was under center. In other words, when you take away the collegiate conceits and are left with Griffin just as a pure quarterback -- scanning his reads and dissecting defenses -- he's just as good as any young signal-caller we've seen come down the pike...

Click HERE to read the rest of the article...

In 2012, no quarterback had a higher DVOA (FO's opponent-adjusted per-play efficiency metric) than Griffin when he was under center. In other words, when you take away the collegiate conceits and are left with Griffin just as a pure quarterback -- scanning his reads and dissecting defenses -- he's just as good as any young signal-caller we've seen come down the pike.
Click to expand...

I was talking with a friend the other day who's a huge Sooners fan, and watched Griff shred them in college. He said it looked from afar like Griff was transcendent at times last season. It was hard to argue with him.
You must log in or register to reply here.