With no one (and understandably so) giving the Redskins a shot on Sunday I can think of 2 games where everyone expected the Cowboys to walk over the Redskins and the Burgundy and Gold walked away with a win.

1995 Redskins 24 Cowboys 17 - The 4-9 Washington Redskins lead by QB Heath Shuler go into Texas Stadium and shock the 10-3 Dallas Cowboys and pull off the season sweep as the Cowboys who were on their way to a 3rd Super Bowl Championship in 4 Seasons. One of the few bright spots in the Heath Shuler Era, he hit Henry Ellard on a slant pass to beat Deion Sanders for a 10 yard TD Pass in the 3rd Quarter to put the Redskins up for good. Emmitt Smith fumbled and the ball barley bounced out of the end zone giving the Skins a touchback and ending a Dallas Drive that could have gotten them back in the game in the 4th quarter.

2006 Redskins 22 Cowboys 19 - Tony Romo was the new media darling in the NFL and ESPN and NFL Network made it seem all week that the Redskins were going to just lay down and die for the NFL’s newest golden child. With one of the craziest endings to a football game the Redskins miss a possible game winning FG giving the Pukes good field position. Troy Vincent blocks the Cowboys game winning FG attempt and Sean Taylor returns the blocked FG. Aided by a 15 yard Facemask Penalty Nick Novak kicks a 47 yard game winning FG which looks like at first it was going to go far right and then some how curved left and was good. On a side note if anyone remembers that was one of the game on NFL Replay the next week and Tony Romo was invited to co host the highlights which leads me to believe they probably had that planned out in advanced. The funny thing is I never saw anyone host NFL Reply before or after that?!?!?! 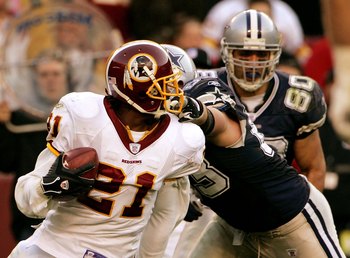 I think it's pretty safe to say the Cowboys are not going to win a Super Bowl this season. Whether they have enough to pass the Giants and win the division is questionable as well.

I'd be all for letting the Cowboys have their day in the sun today in D.C., if it means us having a better chance of securing a high pick to grab the QB of the future who kicks the Cowboys' butts for years to come.

Those are my sentiments as well CH - although I am struggling with them. I will watch today as I always do. But I have no confidence in our current ability to rise to the occasion, nor am I totally committed to really wanting to win this game. I'd rather forego pleasure today in hopes of a brighter future.

I feel better about reading the two previous posts. I've been feeling guilty all week about the team and being ok with a loss to our most hated rival. It's all about the draft now and we can get a special player with that first pick.

For now, I will watch the game (being broadcast locally) and have a good time in chat with my BGO family.

I am not nor will I ever be content seeing the Cowboys beat the Redskins for any reason.

Whether you are content or not, you'd better get ready for it Sorry. But you know it's true.
You must log in or register to reply here.