Big man in the middle.


LOUDOUN COUNTY, VA – The Washington Redskins announced today that they have signed free agent nose tackle Maake Kemoeatu. Terms of the deals were not disclosed.

Kemoeatu spent the 2009 season on Injured Reserve after suffering a torn Achilles tendon during training camp. In 2008, he totaled 40 tackles (31 solo), two passes defensed and a forced fumble while starting 14 games.

After originally entering the NFL as a college free agent with Baltimore on April 26, 2002, Kemoeatu spent four seasons with the club, totaling 153 tackles (82 solo), four sacks and a fumble recovery. Kemoeatu then joined the Panthers, signing as an unrestricted free agent following the 2005 season.

Kemoeatu played collegiately at Utah, were he saw action in 43 games with 35 starts and amassed 160 tackles and nine sacks, earning All-Mountain West Conference honorable mention during his senior campaign.

Per PFT and Scheffter, the Redskins signed him to a 2 year, $7 million deal this morning. Will add details as we go ...

Butterworth as a DE huh?

After seeing his injury, I question what role he'll be playing with the redskins. He's obviously not a starter, at least I hope not. I wonder how they will address the starting NT position?

If haynesworth would take one for the team (yeah right) I wouldn't worry about the NT position.

I think it's premature to categorically say he's not a starter. Before the injury, the man was a fixture in the middle.

He may not be ready to go 60 minutes for 16 games in 2010, but I suspect he'll be a regular part of the rotation. If they didn't expect that they wouldn't have made the move.

Comes down to what level of faith you have in the Redskins medical evaluation team I guess.

Interesting. This guy in the middle, Albert at RE and Golston at LE maybe?

If this guy can occupy two blockers what does the opposition do about Fat Albert? Try to handle his one-on-one? And if they double team Fatty what about Rak coming off the edge?

This could be a sick defense if the coaches get everyone in shape and working together.

Where does Jarmon fit in in all of this?

He passed his physical?

Interesting considering that he previously indicated that he wouldn't be ready for a physical until May or June.

Either he's a quick healer, or it was a matador physical.

I think Golston will be the back up NT with P. Daniels starting @ LE.

We should avoid assuming the Redskins envision him starting--or even playing heavy minutes--early in 2010. Seems pretty clear from following the dots the Redskins know they are getting a guy working hard to rehab a serious injury, and paid him accordingly.

Kemoeatu excited about being a Redskin
by Aaron Wilson
March 10, 02010

The Washington Redskins are banking on nose guard Maake Kemoeatu recovering quickly from a torn Achilles tendon, signing him to a two-year contract worth $7 million.

And Kemoeatu, who's due a series of bonuses between now and the start of the regular season, is excited about how he's going to be utilized in Washington.

So should Albert Haynesworth, who will be freed up to roam around with Kemoeatu occupying blockers.

"When you've got the big guy in the middle like Maake, it allows Albert to be a five-technique, move him around," said Ken Vierra, Kemoeatu's agent, in a telephone interview. "Now, he gets to have the glory while Maake, if he gets healthy, does the dirty work inside. Maake is very happy. He goes there and has a very good meeting with Jim Haslett and Mike Shanahan and everybody.

"Maake has played for the Ravens, the Panthers and now the Redskins. That's three pretty good organizations. Maake's metings with Shanahan were ideal. Everything kind of fell into place football-wise."

Vierra said that the contract is solid with reachable playing time clauses where the $7 million is achievable.

"It all assumes that the Achilles has to respond," Vierra said. "I know he'll put in the work. They are paying him various bonues before the season. That includes a signing bonus that's not seven figures. Is it the $5 million a year deal he had in Carolina?

"No, but this is a chance to rehan and get back in the league and reestablish himself as one of the top nose guards. You're not going to come off this injury and get marquee money, especially in this environment."

Vierra was referencing the labor strife enveloping the league and the potential 2011 lockout.

With that looming on the horizon, having a commitment from a team is a valuable thing.
Click to expand...

from what I read.....he would be very easy to cut if needed. I think they add another NT or two still....and let the best one roll.

I'm fine with this.

Very little of it is guaranteed. If he doesn't play, he probably makes the minimum.

authentic said:
I think Golston will be the back up NT with P. Daniels starting @ LE.
Click to expand...

Yeah, I had forgotten about Daniels when I posted this, then remembered him a while ago. Not sure Golston will be a good NT though. He seems to get moved around a bit much to me. I'm thinking Montgomery would be better at that.

I could be wrong, but doesn't Carolina run a 4-3? If so, would it be safe to assume he hasn't played as a true NT since 2005 with Baltimore?

Nice little feel-good piece from the Inside crowd over at ESPN ...

Every Monday, Scouts Inc. takes a look at the major storylines to watch this offseason:
The Redskins sign Maake Kemoeatu

This signing hasn't gotten a lot of publicity, but I think it could be extremely beneficial to the Redskins as they transition to a 3-4. Kemoeatu is not a young man and didn't play a down last season after tearing his Achilles tendon, but if he is healed, he is exactly what the doctor ordered at nose tackle. He played at a very high level in 2008, and this massive human being is a terrific run-stuffer. 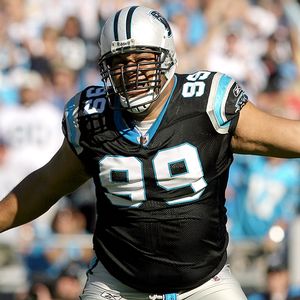 
When healthy and right, he commands double-teams and occupies the point of attack. Rarely does he go backward. Let's assume he is healthy -- or at least will be for the season opener. This addition does a lot for Washington. Obviously, Albert Haynesworth is a supreme talent who is capable of taking over a game. With Kemoeatu at nose on early downs, Haynesworth can play defensive end, allowing the superstar to best use his abilities and make more plays.

Without a guy like Kemoeatu in the equation, Haynesworth surely would have gotten the nose tackle job by default. Of course he could excel there, but eating double-teams just doesn't get enough out of what Washington has invested in Haynesworth. Even with the shortage of nose tackles in the league now, Haynesworth is incredibly special, and using his vast skill set in many ways is best for this team.

This signing also allows the Redskins to better concentrate on the offensive side of the ball on draft day. Kemoeatu might never be the same after his injury and Washington may never get a thing from this signing, but the reward vastly outweighs the risk. It might just pay off hugely.
Click to expand...

Plenty of players have come off achilles injuries to play at a high-level. Jansen had a couple good years after his injury in 04. It wasn't til 07 that Jansen's play really started going downhill.

I love these kind of high reward low risk moves. If this works out, the d-line should be pretty stout. I don't think the Skins are dumb enough just to rely on Haynesworth and Kemo being healthy for a whole season. They will definitely have a back-up plan.

I have heard that Montgomery is a fairly lazy fellow, and that is his down side. If he could catch up with these two, I think he could be part of something special. Let's hope he does, although I doubt it.
You must log in or register to reply here.