LOUDOUN COUNTY, Va. – The Washington Redskins announced today that they have re-signed linebacker Rob Jackson. Terms of the deal were not disclosed.

Jackson (6-4, 266) was originally selected by the Redskins in the seventh round (242nd overall) of the 2008 NFL Draft. He has spent all six of his NFL seasons in Washington, appearing in 54 regular season games with 15 starts.

For his career, Jackson has recorded 63 tackles (43 solo), nine passes defensed, 7.5 sacks, five interceptions (one of which he caught in the end zone for a touchdown), three forced fumbles and one fumble recovery. He appeared in 12 games with one start in 2013, one year removed from a 2012 campaign in which he made a career-high 14 starts and registered 4.5 sacks and four interceptions for the Redskins’ NFC East title team that season.

Jackson played collegiately at Kansas State from 2006-07, starting 23 of the 25 games in which he appeared and totaling 61 tackles and 6.5 sacks in his two seasons as a Wildcat. The 2007 Big 12 honorable mention selection previously spent two seasons playing for Fort Scott (Kan.) Community College from 2004-05.

This was a very good move by the team. There were no outside linebackers behind the starters other than Brandon Jenkins and he is another guy that is trying to come back from a Lisfranc injury (in college).

When he gets on the field the ball seems to come to him.

Other than DeAngelo Hall and on occasion Ryan Kerrigan there aren't a whole lot of guys on our defense you can say that about.

This also means we don't necessarily have to look OLB in the top rounds of the draft.

I like that they let him test the market. It obviously worked.

Dallas could have used Jackson in their revamped 4-3. Surprised they didn't even visit with him.

Yes Mike, please show us the picture of R-Jax, that you scribbled with your crayons !!

Could it be any worse than Ryan Clark needing help getting dressed ?

I'm lovin that Jackson signed. Above average depth / rotational player with a motor that doesn't quit. Likely one of the best off season signings thus far. 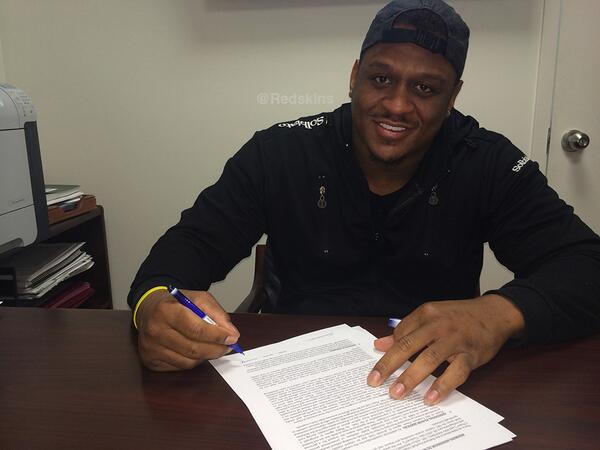 Bulldog's Twin said:
Dallas could have used Jackson in their revamped 4-3. Surprised they didn't even visit with him.
Click to expand...

Agreed, I don't get it either...I was SO afraid of seeing RJ back with a blue star on...maybe they're waiting to see when Bowen gets released if he'll play for the minimum...if he'll pass the physical that is...
You must log in or register to reply here.