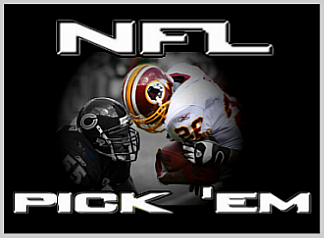 We worked out some minor kinks this week, except when it came to some of our picks

Here are the results for the first full week of Pre-season games.

Kudo's to Burl, Chris, and DMarple2 for taking the top 3 positions this week.

Don't forget to make your picks for this week before the first Thursday night games! And again, remember, Pre-season games will not count towards the final results or for prize consideration.

I see Docsandy still managed to come in last, even after having his picks corrected.

I'm not sure what that means though as it is only the preseason. He'll probably end up picking the best during the regular season.

Lets hope your theory is correct, as I was right there leading the way with Docsandy (he is a she btw )

I'm pretty confident that's the last you'll see of me on the top.

Yeah, I am hoping for the same scenario as Boone. I didn't fare so well either. But hey, there's always next week!

Don't forget there are games tonight, folks. Two of 'em.

Get yer picks in!

Well, I gave everybody a week to think they have a chance at this thing.
(ok, so I forgot)
But now, I'm gonna get some preseason work in.

After making my picks this week, I'm left wondering how they set the spread in these preseason games. Pittsburgh is only favored by 1. I'd have made the spread higher, but we all know anything can happen in preseason.

China said:
After making my picks this week, I'm left wondering how they set the spread in these preseason games. Pittsburgh is only favored by 1. I'd have made the spread higher, but we all know anything can happen in preseason.
Click to expand...

Especially since the Steelers will be the home team.

Can't believe there even are spreads in preseason. Speaks to our society.

Think about it ... there are dudes out in LV whose job it is to decide what teams fans around the country think care more about 'winning' preseason these practi----er, games than others.

And weigh that along with which teams are playing what starters, for how long, and whether they think they better 'win' one this week because they got smoked last week and, well, you know, fans care about that.

And which 3rd string OL will do better against which mixture 2nd-3rd string DL in the 4th quarter rushing which rookie FA quarterback throwing to which 7th round WR with a bad hammy who's playing anyway because he needs the job and knows next week the starters will "play" longer and this is probably his last playing time before cutdowns.

And which coaches think it's more important to "drive" for that winning FG in the closing minutes rather than call a couple dive plays so they can see if the 3rd-round rookie LG they were hoping might crack the 53 man roster might be able to actually block his guy one time, or if they really are going to have to put him on the practice squad after all.

China said:
After making my picks this week, I'm left wondering how they set the spread in these preseason games. Pittsburgh is only favored by 1. I'd have made the spread higher, but we all know anything can happen in preseason.
Click to expand...

Just fyi, the spreads are loaded by the product webmaster - we actually could load our own right from the vegas lists, but I decided to keep the first contest simple this year, and not have people picking based on spreads, but just straight up wins. Next year, we could have 2 contests if that's something you guys decide you'd like to do.
You must log in or register to reply here.