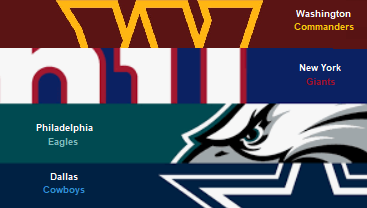 
Though it's obviously a matter of opinion, I don't think competition in the NFL gets much better than the NFC East, where the New York Giants, Dallas Cowboys, Washington Redskins and Philadelphia Eagles have been attempting to destroy each other for decades.

There's never a shortage of plotlines and intrigue with those four teams, so perhaps it shouldn't be a surprise the NFC East is the league's most popular division, according to the latest offering from ESPN Sports Polls.

In an earlier survey on favorite teams, the Cowboys (1), Giants (3) and Eagles (9) all occupied space in the top 10. The Redskins brought up the division rear at No. 13, though trading out John Beck for franchise quarterback Robert Griffin III could change things in a hurry.

I'm surprised we're still that high.
You must log in or register to reply here.