2010: Two-year starter at defensive end on the right side at Florida State...widely recognized for his relentless motor on the field...enjoyed his best season with the Seminoles, posting career-highs for tackles (64), tackles for loss (12.5) and quarterback sacks (8.0)...ranked fifth on the team in tackles, which included 40 solo stops...started all 14 games for the `Noles...put together a seven-game streak with at least a half-sack in each game... teamed with left defensive end Brandon Jenkins to form one of the most dynamic pass rushing tandems in the nation, combining for 21.5 sacks...FSU tied for the nationally lead with 48 sacks...posted a career-high eight tackles against NC State, which he matched a week later against North Carolina... ranks 15th all-time at FSU in career tackles for loss with 28.5, passing Marvin Jones on that list with 1.5 against Virginia Tech in the ACC Championship game...also shared the team lead with two fumble recoveries this season, to go along with one forced fumble ... selected by the coaches as the most improved linebacker at the end of spring practice.

2009: Started 12 games and played in all 13 for the second consecutive season...registered 38 tackles to finish sixth on the team...was second on the team with 10.5 tackles for loss, which is the most among returnees...also registered two sacks, three quarterback hurries, an interception and a forced fumble...opened the season with a 31-yard interception return for a touchdown against Miami to go along with five tackles...matched that tackle total against Boston College and North Carolina.

2008: Tied for seventh on the team with 29 tackles despite playing behind second round NFL Draft pick Everette Brown...the junior college transfer led all Seminole newcomers in tackles....registered 5.5 tackles for loss, one sack and one forced fumble....played in all 13 games and shared top newcomer honors on defense with Nigel Bradham.

PERSONAL
Came to FSU after earning JUCO All-American honors at Butler Community College...a five-star recruit by Rivals.com...was named the NJCAA national player of the year in his lone season at Butler, which went 12-0 and shared the national title after routing No. 1 Snow College...set the Butler record with 24.5 sacks which led the nation, as did his six forced fumbles...also amassed 97 tackles, of which 39 were behind the line of scrimmage...attended John I. Leonard High School in West Palm Beach where he enjoyed even greater distinction for his play on the basketball court...spent a brief period of time at Rutgers before landing at Butler...ultimately signed with FSU with three years of eligibility remaining, despite offers from Miami, Oklahoma, North Carolina, Arkansas, West Virginia, South Carolina and Kansas State...born November 25, 1987.

I'm really impressed with the fact that we have made several picks this year on players who have been noted as having a desire to be great.

A culture change was needed in D.C. as much as responsible and professional management was. I'm hoping that the likes of Kerrigan, Jenkins, Hankerson and others go a long way towards establishing the Redskins as a blue-collar group, much like the championship winning teams from the past that we grew to love because of not only their play on the field, but because of the way they carried themselves on the field.

I teach a grade 8 student who sounds very similar to White. He will randomly have seizures multiple times throughout the day. He also takes medication throughout the course of the day. For instance, you could be playing in gym class and all of a sudden the boy will be walking away off the field in the middle of the play, only to realize that he's standing in the middle of nowhere once he snaps out of his seizures. The seizures last for about 10 - 15 seconds on average, and if he's not supervised carefully he certainly could put himself in danger and become a risk to get seriously injured. It's a testament to White that he can play college football with a condition of this nature.

It's clear the Shanahan's are trying to put their stamp on this team with character guys known for motivation, leadership, and positive spirits. Sure seems like we put a premium on solid character in this draft. Now if these guys can just play

Agreed. The trend was pretty obvious by the third round. Bringing in guys like this will go a long ways towards the kind of culture shift that this team has been sorely in need of for far too long.

I have a feeling these are the type of guys Coach Fletcher and Coach Daniels will LOVE having around. Love the blend of youthful desire and veteran leadership that will allow Shanahan to get rid of the dead weight. 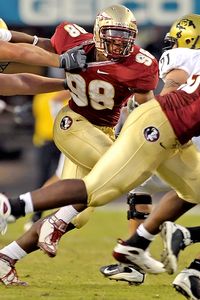 Oh and btw, that was not called.

MikeSr619 said:
thats the move he has to graduate past too. he needs a swim move, a shuck em move, a bull rush....he should have an arsenal of moves to prevent the choking hold.
Click to expand...

...or a move that causes the referee to automatically throw a flag.

MikeSr619 said:
a flag isnt the same as the mental and physical effect of knocking a QB like Romo on his brittle ass and him knowing he better know where you are at ALL times or else he is going to get clobbered.
Click to expand...

I think the two go hand-in-hand. A 10 yard holding penalty is almost like a sack but without the loss of down. More holding calls will, theoretically, lead to less holding and, therefore, more Rak sacks. At least it says so on paper.

Like the chick says at the end of Trading Places, "Can't we have both?"

Obviously, a sack is going to have a bigger impact but Offensive Linemen are supposed to do EVERYTHING in their power to keep the QB upright, including holding. I'm for ANY play that sends the other team backwards.

Elephant said:
You mean this Om?
Click to expand...

I dunno, Mike. Considering how many times Rak has been clotheslined the thought of finding your team with a 3rd and 30 every so often might make you rethink your strategy.

Anyone know where this kid projects to play in our D?

I would think OLB, but he is so much like Andre Carter that it scares me. if we were running a 4-3 I would actually have called this a great pic, running a 3-4 I dont think so.

A Q&A with Markus from HogsHaven. The more I learn about this young man, the more I am convinced that he will make the team and be a quality backup for many years. He could be in the rotation at OLB sooner than we think.

Here is the article:

Recently, I had a chance to exchange a few questions with 7th round pick LB Markus White out of FSU. Now in a time-frame when most may think a 7th round pick in the aftermath of drafting 12 players would equal out to a trip to the practice squad or maybe even cut from the team, you may want to rethink your thoughts on this one. The main reason Markus slipped as far as he did in the draft is because many teams were scared off by the seizures that he has endured since the 7th grade. That did not stop him from getting 8 sacks and 58 tackles last year at Florida State though and Markus has not had a seizure since 2008. After exchanging a few thoughts with him I can see he is determined to succeed and be successful in the NFL.

(HTTR4LIFE) Let me start by saying thanks for your time and Welcome to DC! How does it feel to have a team with such a storied tradition and the best fans in the NFL draft you?

(MW)"Well 1st and foremost, I want to say that it is an honor and great opportunity to have a chance to do what I love in front of such a fan base and in our Nation’s Capital. It has felt great so far I’m just feeling blessed for the opportunity to seize the moment."

(HTTR4LIFE) Tell all the Redskins fans a little about yourself, where you’re from, who your favorite football team was growing up, etc.

(MW)"I’m from West Palm Beach Florida which is South Florida for those who don’t know and I naturally grew up being a Dolphins fan, my father and big brother are as well, so I followed the rotation. I grew up mainly playing basketball although I excelled in football. I was inspired by people around me to follow my dreams so here I am today a proud Washington Redskin."

(HTTR4LIFE) At 6-4, and 266 pounds your size is perfect for the 3-4 Linebacker position, but you played DE at FSU. Which spot do you prefer and has anyone given you any ideas on which position you will play?

(MW) "I have been training to play the 3-4 positioned OLB all spring and I'm looking forward to playing that position for the Redskins. I have a lot more experience at DE but I’m willing to take on the challenge of learning a new position and also be able to exploit my athleticism to the world while doing so."

(HTTR4LIFE) Any thoughts on the current lock-out in the NFL and how it affects you as an un-signed rookie? And have you had a chance to speak with any of your new teammates?

(MW)"I feel the lock out makes it a little tougher for an incoming rookie in many ways, but I'm just patiently waiting for them to confirm there being a season in 2011 and if I get that, I’ll be satisfied and all I can do after that is take everything in as fast as possible and give it my all. I haven’t really gotten to reach out to any of my teammates other than my former teammate Graham Gano. He welcomed me in and everything. Now, I’m anxious to be introduced to the system I'll be competing to become a part of."

(HTTR4LIFE) This one is important, just how do you feel about the Dallas Cowboys?

(MW)"I feel like there can be no better feeling than competing against America's team multiple times a year for the victory!!! It’s what the game is all about."

I am hoping he can tansition but I dont think he will, he would be a very solid pick up and an immediate roatation guy in an aggressive 4-3.

sell dumpss? Who in God's name would want to buy that ****? Seems like a heavy load to me...
You must log in or register to reply here.