Surprised one of these threads hasn't been started yet, either way, never too late!!

I'm really looking forward to the hockey games, hoping USA can get up into some of the big games. Even if we lose, I'll be happy considering we really aren't considered to be anything. I'd much rather see Russia defeat Canada though if it does come down to that kind of game.

USA leads right now with 8 medals all together, 2 gold, 2 silver and 4 bronze.

I'm just hoping NBC shows more than 5 minutes of hockey and less than 15 minutes of Costas TALKING about hockey during each period. Their coverage has blown chunks so far.

Oh, and maybe showing it LIVE would be good...stupid tape delays! Vancouver is only 3 hours behind the East Coast! Why tape delay? Morons.

on twitter, Dmitry Chesnokov from Puck Daddy has some fantastic stuff on team Russia, which for those of you who don't know, is interesting for Caps fans cause Ovie, Semin and Varlamov are on the team.

Their #1 line is Ovehckin, Datsyuk and Semin...that line might score 50 goals this Olympics, lol.

I make sure to get the TV on for USA vs. Switzerland and what's on right now? Curling. Why the hell is this even a sport?

Haha! I am pulling for team USA to win gold, of course, but Russia and Sweden are 2nd and 3rd. Anyone but Canada!

Lanky Livingston said:
Anyone but Canada!
Click to expand...

USA and Switz about to start, lets go USA!!!! 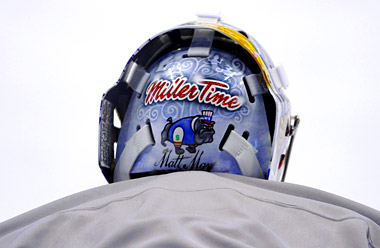 I enjoy watching the speed skating, especially short track. Hopefully can catch some curling the next couple of nights.

Curling is about as boring to watch as Nascar, but like Nascar, it would be fun as hell to participate in.

I like the "big air" stuff and hockey, personally.
Posted via BGO Mobile Device

Curling has an appropriate name, and is the perfect sport for a cold climate, after doing many 12oz curls. How in Gods name a guy from Cape Coral Fl made the US team is beyond me, but what the hey, more power to him.

While I respect the dedication involved with figure skating, I've been greatly disappointed ever since they removed the skating of the figures.

Being a speed freak, I'm big into the alpine events, and lovin every minute I get to see. We've made some waves with Gold and Bronze in Women s Moguls, back to back Gold in mens snow cross, and there so much action to come. Tomorrow night is one of my favorites, half pipe. Tonight, super combined.

I got little pleasure in Apollo's victory the other night, as the US skaters were clearly beat, and got a lucky break. Yup, that's part of the game, but falling into the **** instead of being the **** isn't as satisfying to me.

Overall, I kind of feel bad for Canada. They have had a few screw ups that have really made them look like morons. No padding on poles inches off the track, and an additional wall added after the fact a man lost his life. Ice machines that screwed up the ice to the point speed skating events were delayed.

Recently had someone to explain curling to me, so now have a little better understanding. He said once had the stone freeze to the ice when trying to the pass (or push) down the ice.

Will watch some of the hockey, but interested in bobsledding. The speed is a factor and why we don't excel here is beyond me. Up to a few years ago we got everyone else's leftover sleds. Just recently Geoff Bodine, for NASCAR driver, started developing sleds for US team. Maybe this will be our year.

Canada and Russia both showed their offensive fire-power yesterday, putting up 8 goals a piece. USA only managed 3 goals, but was facing an elite-NHL goaltender Jonas Hiller (neither Norway or Latvia, Canada and Russia's respective opponents, have one).

Best single-day performance in the Winter Olympics ever by the US!

Anyone else watch Shaun White? That kid is not human.

Lanky Livingston said:
Best single-day performance in the Winter Olympics ever by the US!

Anyone else watch Shaun White? That kid is not human.
Click to expand...

I stayed up to watch it, and it was so funny. Having won before the second run, I loved his comments.... "what should I do"... "Ride straight down the middle ?" and the commentator apologizing for the trainer saying knock the **** out of it.....

I can't believe he pulled of the double McTwist at such a slow speed. He's raised the bar once again.

I was even more impressed with Vaughn, and her down hill run. Watching her compensate for her right shin, and win convincingly was just a beautiful thing to watch. Just an amazing competitor.

I recorded his trick in HD, finally uploaded to YouTube, damn Cox Cable and their terrible service!!

I don't think it will embed because YouTube disabled it, but here it is:

Well, Canada finally faces an elite goaltender, and end up having to win in the shootout against Switzerland (the team USA beat 3-1 in their first game). This is good for a few reasons - IF, and its a HUGE if, the US can beat Canada on Sunday, Canada will most likely NOT get a bye for the real part of the tournament (only the top 4 get byes).

Lanky Livingston said:
Canada and Russia both showed their offensive fire-power yesterday, putting up 8 goals a piece. USA only managed 3 goals, but was facing an elite-NHL goaltender Jonas Hiller (neither Norway or Latvia, Canada and Russia's respective opponents, have one).
Click to expand...

Yeah that little **** had to win it.
You must log in or register to reply here.