Thus far, Snyder has been impressed by what he's seen from Gruden. 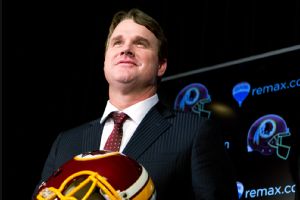 "He's a terrific workaholic and a pleasure to be with and very focused on making all the great football decisions," Snyder said. "It's going to be exciting for us."

Snyder did not speak publicly last season and had not addressed the media since hiring Gruden. He said he likes the qualities Gruden brings, especially as a former high-level college quarterback with professional experience.

Having been a quarterback could help Gruden with Robert Griffin III, whose relationship with former coach Mike Shanahan was dissected often last season.

"I think terrific," Snyder said when asked how good Gruden's background is for Griffin. "Terrific. As someone who plays that position and understands it as well as he does, it's going to be a lot of fun."

Snyder said Gruden's background is what sold him.

"If you look at his experience and what he's done over the length of his career, it's really diverse," Snyder said. "He understands the quarterback position. He understands offense. He's been a head coach [in the Arena League]. He's someone that really understands the game from every facet."
Click to expand...

He made a playoff qb out of Andy Dalton with play calling and a talented surrounding cast.

It will be interesting to see if we add a WR with size in Round 2 or 3 to open things up on offense.

We really need to get lucky and land a Victor Cruz type impact rookie .
You must log in or register to reply here.