The whole series, as cheap as it's ever been for 24 hours at Amazon

one of my favorite exchanges:

Frank Perconte: Now just think... if you had any class or style like me, somebody might've mistaken you for somebody.

SGT Martin: Oh, like your ****in' Sergeant?
[Martin shows Perconte his SGT insignia on his arm] 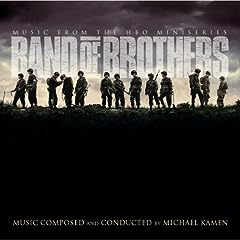 The soundtrack is also very good. Except for the main theme you really don't notice it during the movie but standing alone it is quite good.

HBO is also running it again in preparation for their new series that will be focusing on the Pacific campaign. I am looking forward to both.

I think my favorite scene from Band of Brothers is when Winters has become Major and they are attacking Foy on a cold, snow covered morning after weeks in the woods being bombarded by the Germans. The knuckle headed Ivy League Lt. (I forget his name) is getting Easy Company killed by halting the attack on the town when Winters, who is standing along the tree line overlooking the attack screaming for the men to move on, starts to run onto the field of battle to get Easy where they need to be. The General orders him back! As he steps back, he is already ordering Speirs into place. Without hesitation he gives Speirs the order to proceed and relieve Lt. Numbskull of his duties.

I know it is Hollywood, but it always impressed me how calm and under control Winters appeared from training through the attack on the German heavy artillery that was killing our soldiers on the beach on D-day to the eventual march into Berlin. With the retelling of these stories by these men, I can't help but believe at least most of it is true.

Foxhole Norman Dike is the name you are looking for.

One of my all time favorite movie/tv quotes came from this series.

Just a fantastic series--I too am really looking forward to the new Pacific series.