ESPN Mag article from one of the guys I respect most in the business, Tom Friend.

Third and Gold: The story behind RG3's name is as good as his game 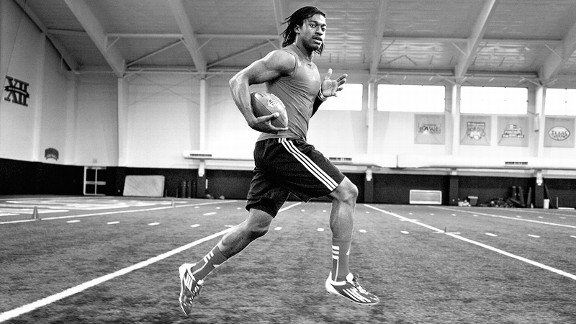 On his way out of the hospital, Robby seemed pensive and asked his father why she had squeezed his hand so long. "She lost her son young -- my daddy, your grandfather -- and you remind her of him. You know who I'm talking about, right?"

Robby asked questions about the original Robert Griffin and heard about his toothy smile, about how he slapped almost everyone he met on the back. But it never came up again until Robby took the field for his first game as a Baylor Bear two years later, wearing Griffin III on the back of his jersey.

From his seat in the stadium that day, Robert Griffin II was stunned. No one had ever called his son "Robert Griffin the third," and he wasn't sure he was in favor of it. He'd named him Robert at his father's request and regretted it for years. He didn't want his son to feel the burden he had felt, of living up to his father's name. But the moment Robby showed up for that first game proudly wearing his Roman numeral, Robert Jr. realized his son -- soon to be known as RG3 -- had become his own man.

He thought about Robby's life. At 2, he was living in Japan, and at 6, he was living in a slum. At 9, Robby was singing solos in church, and at 11, his principal thought he'd someday be U.S. president. He had finished high school in three and a half years. He irreverently wore SpongeBob socks and composed songs. His goal in life was to be a lawyer. So the III on his back wasn't a burden at all; it was the symbol of one family's journey. "My dad always promised me he'd give me more than he ever had," Robby says. "The least I could do was pay him back, pay my great-grandmother back, pay my grandfather back."
Click to expand...

awesome read. thanks for posting!

as someone who frequents many redskins blogs, news sections, forums, and listens to tons of redskins radio programs, i must say i wasn't aware we had altered the fight song.......

Yeah, I'm not sure if my old friend Tom didn't take a little liberty there...

Some absolute gems in that article though.

yeah. makes the guy very easy to root for, and makes me happy he's coming here.

i just hope the local media and the 'fan base' (read: fair weather/bandwagon fans with no patience) aren't expecting him to win 50-0 week in week out. we all know how vicious the local media is when they get the vibe that people in the area hate/like something, they go all out to pull in the ratings by following that mentality.
You must log in or register to reply here.