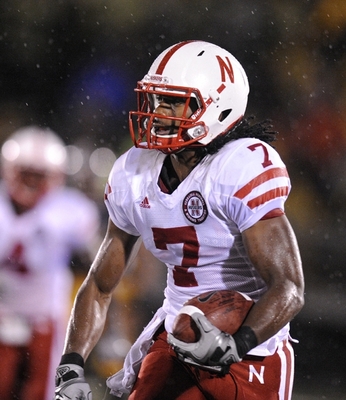 
Senior defensive back DeJon Gomes was arguably Nebraska’s most versatile defender in 2010, and certainly was one of the Blackshirts’ most valuable performers. The 6-0, 200-pound Gomes continued to show his ball-hawking ability as a senior and his defensive back-linebacker hybrid role played a large part in Nebraska ranking in the top 12 nationally in pass defense, scoring defense and total defense.
Gomes finished second on the team with 99 tackles, including 51 solo stops and had four games with double-figure tackle totals. He also had a sack and four tackles for loss, along with seven pass breakups. Gomes intercepted three passes, giving him seven career picks, and also recovered a fumble, while forcing two others. He was one of four defensive backs to return an interception for a score, sprinting 40 yards to the end zone against Idaho.
Gomes was recognized for his play as an honorable-mention All-Big 12 choice by the league’s coaches and media. He was a second-team choice by the Kansas City Star.

2010 (Senior)
Western Kentucky: Keyed a defensive effort that allowed just 120 yards in the air, finishing with six tackles, including four solo stops, and forced a fumble. Idaho: Enjoyed one of the best games of his career with 10 tackles, including eight tackles in the first half when NU built a 31-3 lead...picked off a pass and returned it 40 yards for a touchdown, one of two INTs for scores in the first half. Washington: Anchored a defensive backfield that held UW to 71 yards on 4-of-20 passing...totaled five tackles, including four solo stops, and added a quarterback hurry. South Dakota State: Keyed a Husker defense that allowed 236 yards, including 95 yards through the air, with nine tackles. Kansas State: Anchored a stingy defense that limited KSU to just 135 passing yards and 13 points...set a career high with 12 tackles, including seven solo stops, while forcing a fumble, a TFL and adding a quarterback hurry. Texas: Reached double figures in tackles for the second straight game, totaling 11 stops, including four solos...helped limit Texas to just 62 yards passing and 271 total yards. Oklahoma State: Had a team-high 10 tackles, reaching double figures for the third straight game...had four solo stops, as the Huskers handed the No. 17 Cowboys their first loss. Missouri: Shined in pass coverage, as the Huskers limited No. 7 Missouri to a season-low 199 passing yards on 42 attempts...totaled four tackles, a season-best two pass breakups and added his second interception of the season. Iowa State: Turned in a sterling effort at Iowa State, totaling six tackles, including a pair for losses, and adding two pass breakups in the overtime win over Iowa State. Kansas: Helped anchor a defense that allowed just 87 yards, as he totaled five tackles, including a six-yard sack - his first of the year. Texas A&M: Had six tackles against the Aggies, including one solo stop...tallied one pass breakup...helped the Blackshirts hold Texas A&M to nine points. Colorado: Was Nebraska’s nominee for weekly Big 12 honors, as he recorded five tackles, an interception and a fumble recovery in the win...NU converted both takeaways into scores...opened the second half by intercepting a Cody Hawkins pass that NU turned into a touchdown to make it 24-3...set up NU’s final touchdown, as he scooped up a fumble and returned it to the CU 3-yard line before the Huskers scored two plays later. Oklahoma: Totaled four tackles and a pass breakup in the Big 12 title game loss to the Sooners. Washington: Gomes had six tackles, incluiding three solo stops.

2009 (Junior)
Gomes played in 13 games, including six starts in the final nine games. He finished with 46 tackles, including 26 solo stops and four tackles for loss. Gomes also intercepted four passes to rank third on the team, helping NU rank seventh nationally with 20 interceptions. Gomes ranked 10th in the conference in interceptions per game.

Gomes played in three of four non-conference games and totaled four tackles and had a forced fumble against Louisiana-Lafayette. At Missouri, he came off the bench to post five tackles, including three solo stops, a TFL for two yards and a pass breakup. He made a huge play in the fourth quarter, setting up NU's third TD in four minutes with a 40-yard interception return to the MU 10. Gomes made his first start against Texas Tech and had six tackles. He picked off his second pass at Baylor and also forced a fumble against the Bears. He had five tackles and a breakup against Oklahoma, then had a team-high eight tackles, including five solo stops and a tackle for loss at Kansas. He also forced a fumble deep in NU territory to stop a KU drive and had two breakups and a quarterback hurry.

Gomes had five tackles against Kansas State, then made two stops and picked off his third pass at Colorado. He made five tackles, and a season-high two TFL against Texas. Gomes also picked off a fourth-quarter pass that ended a UT scoring threat and resulted in a field goal that gave NU a 12-10 lead. He had one tackle in the Holiday Bowl against Arizona.

Gomes starred as a prepster at Logan High School in Union City, Calif. He primarily played running back in high school and rushed for about 1,000 yards and 24 touchdowns as a senior, before switching to defense for college. Gomes chose Nebraska after also visiting Houston.

Personal
Gomes was born on Nov. 17, 1989, and is the son of Norman and Deon Goolsby. He is majoring in psychology at Nebraska. He has volunteered his time with the Down Syndrome Association for Families Night and the Madonna Hospital Wheelchair Football workshop.