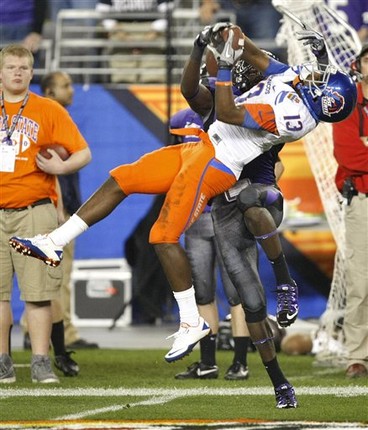 COLLEGE - (2009) Started all 14 games at cornerback for the Broncos... Named Defensive Player of the Game at the 39th Annual Tostitos Fiesta Bowl after putting up his best performance of the season as he registered seven tackles and picked off two-passes, returning one 51-yards for the Broncos first score of the game...Finished the season with 45 tackles (29 unassisted)...Led the team with the most interceptions with six...Finished second in the WAC in interceptions...Recorded three pass breakups...Had five tackles and two interceptions against Idaho...Also had five tackles against UC Davis, La Tech and Nevada...Recorded one interception against Bowling Green and another one against New Mexico State....Honored for his performance in the Fiesta Bowl by being named one-of-four defensive backs on the CBSSports.com All-Bowl Team.

(2008) Intercepted three passes against Hawai'i, second-most in one game in Boise State history ... Named to Phil Steele Publications' All-WAC second team ... Made 10 solo tackles and had two assisted tackles in Broncos' 37-32 win at Oregon ... Had 11 tackles against New Mexico State ... Finished season with 54 tackles (38 unassisted and 16 assisted), sixth-best total on the team ... Finished regular season with five tackles for loss for minus-17 yards and four interceptions and 43 yards in returns.

(2007) One of five true freshmen to play in 2007 ... Backup defensive back and special teams player... Finished with 16 tackles ... Had season-high five tackles at Hawai'i ... Finished with four tackles at Louisiana Tech ... Made two tackles against San Jose State and had one tackle against Southern Miss, Nevada, Idaho, Fresno State and East Carolina in Sheraton Hawai'i Bowl.

HIGH SCHOOL - Three-sport letterman at Franklin High School in Elk Grove, Calif., lettering in football, basketball and track and field ... Named first-team All-Delta League as both a junior and senior ... As a senior had 300 yards receiving, six touchdowns and 60 tackles ... As a junior had 905 all-purpose yards ... Member of Honor Roll ... High school coach was Mike Johnson.