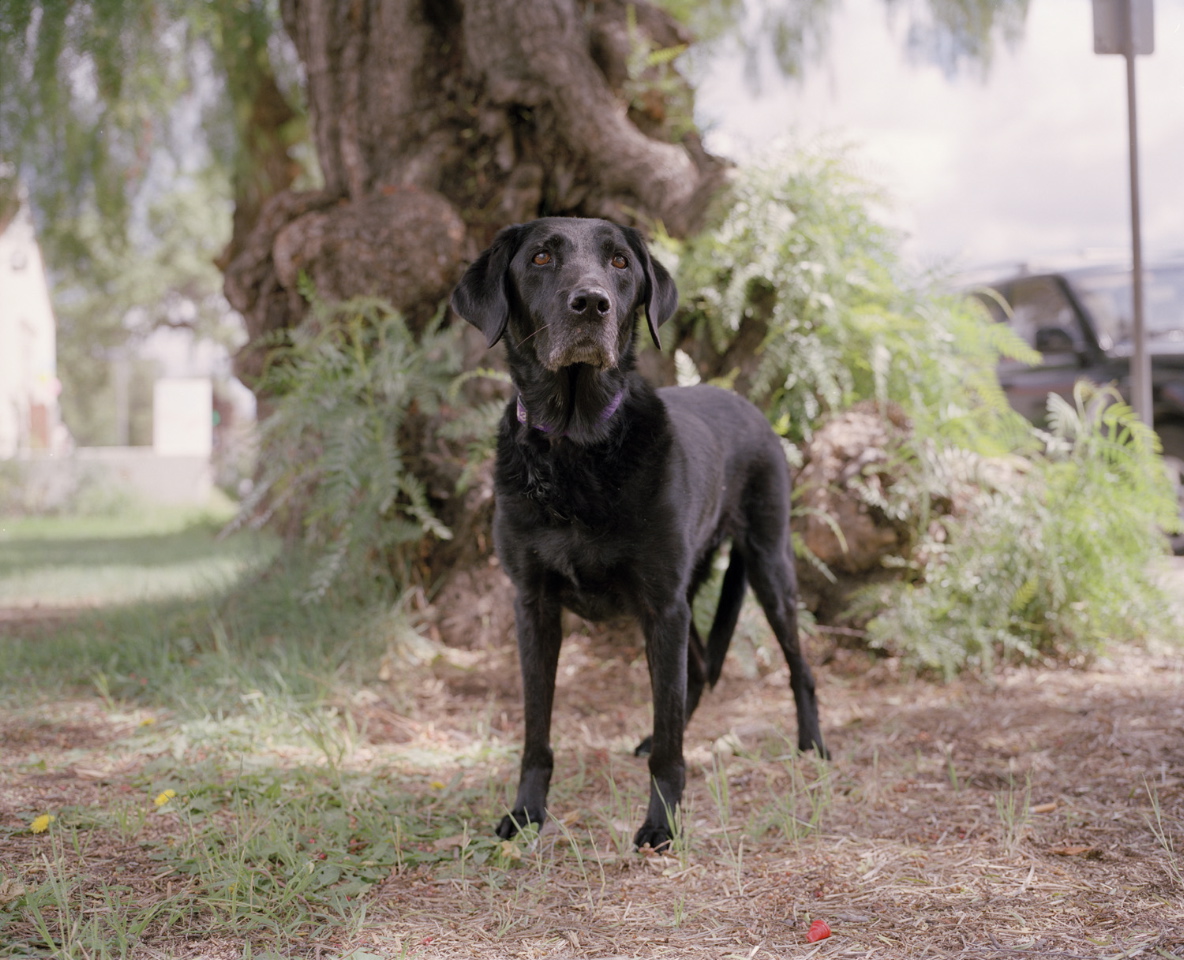 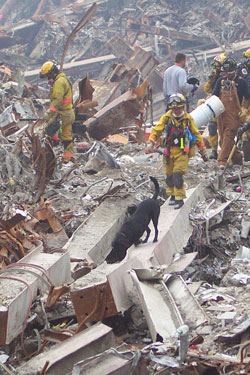 Eleven days after the terrorist attacks on the World Trade Center, Debra Tosch arrived at Ground Zero with her partner Abby to search for survivors.

“We turned this one corner and there it was: the collapsed towers. It was overwhelming, like, where do you even start?” Tosch recalls.

Abby, a black Labrador trained to lead rescue teams to trapped victims in disaster areas, was more assured. “She knew it was time to search,” says Tosch, the executive director of the Search Dog Foundation.

As one of 13 SDF teams deployed by the Federal Emergency Management Agency after the Trade Center attacks, they traveled from the West Coast to New York City on a military transport with the San Diego Task Force. At that point, Abby and Tosch had been a certified rescue team for almost three years, but they had never experienced anything approaching the scope of the World Trade Center devastation.

“As we were going to and from the site, people were calling out 'can you find my daughter? Can you find my son?’” Tosch says. Her normally cheerful demeanor grows markedly more solemn as she recalls the mission.

Abby also had a unique reaction to the devastation.

“At the site, the dogs definitely picked up on something from the handlers and from the environment that said, 'this is for real,’” Tosch says. “They were more in-tune and sharper in their obedience and listening than we had ever seen them."

Trained to detect the scent of live humans buried under the rubble, Abby scurried off-leash when Tosch shouted the green-light command -- “search” -- climbing between twisted metal and under sharp, steaming slabs of concrete. “The dogs go to the places where humans can’t go and as handlers we stand nearby and communicate with the dogs about where they should go,” she explains. “If I want her to go in a certain direction, I step in that direction. We also use voice commands and whistles.” Over 10 days, they worked tirelessly in 12-hour shifts. They didn’t find anyone alive.

"In some areas, Abby indicated somebody was there who had passed away," Debra says, her voice quieting.

In their line of work, finding a human alive is rare, and Abby and Tosch have never experienced it. "You always hope you do find someone but it’s just as important to make sure nobody is left behind.”

Abby was born to search. The only female in a litter of seven black Labs, her mother was a search dog and her mother’s master was Wilma Melville, founder of the Search Dog Foundation. At 10 months old, Abby went to a professional training facility in Gilroy, Calif., to hone her craft and meet her human handler and master, Tosch.

Training involves multi-tiered certifications and can take several years. Much of the time is spent at recycling centers, where volunteers are buried under rubble. When a dog finds them and alerts the handler with a bark, they're rewarded with a tugging toy from the volunteer who was buried. "They learn that they have fun with the people they find so they can’t wait to go out and look for them," Tosch explains. Learning to climb ladders (something Abby always loved) and navigate difficult obstacle courses is another important factor, as is the ability to respond to key human words.

A year after 9/11, Abby and Tosch flew to Salt Lake City for the Winter Olympics —they were on-call in case an athlete was buried in snow. In 2005 they went to La Conchita, Calif., to help with rescue efforts after a deadly mudslide. They also flew to Louisiana after Hurricane Katrina to search through flooded, ravaged homes for stranded victims.

In 2006, when Tosch’s role as SDF’s executive director became too consuming to continue working as Abby’s handler, Abby paired up with another member of the program, Ron Weckbacher. Together Weckbacher and Abby worked as first responders until September 2008. During Abby’s last mission, searching for victims of a commuter train crash in Chatsworth, Calif., it became clear she was getting ready to retire.

At 11 years old, her athletic ability was waning and she struggled to climb over metal and concrete wreckage she had easily navigated at the World Trade Center. To officially mark her retirement, they held a search at the training facility where Abby “found” Tosch buried under a rubble pile and got to celebrate with her master and best friend with a big tug.

These days, Abby is far from the frontlines. The 14-year-old still has the mind of a searcher, but her back legs are weak. Tosch sees her heading towards possible paralysis, a condition common for her breed. But she remains at her master’s side, accompanying Tosch to the office and sharing her Ventura home. A plush dog bed has replaced the training crate she slept in when she was on-duty, and now she gets to enjoy long walks and tug-toy games without the pressure of missions.

If Abby’s memory of her rescue mission at the Trade Center is gone, Tosch’s is still strong. She will never forget the sleepless nights, scrubbing Abby of toxic debris after her searches, the profound devastation of the families of victims and the desperate need to keep searching. It was a true test of their partnership.

“When you go to something like the World Trade Center, you need to be able to trust each other,” Tosch says. “I needed to trust that she’s not going to leave anybody behind in the areas we searched and she needed to trust that in the areas I was taking her to, [that] she wasn’t going to get hurt.” That trust proved steady in the days and years after September 2001. “Abby has taught me so much,” says Tosch, in a moment of reflection. “She’s taught me about patience and what it means to really trust someone.”

Awesome, awesome story. Being a hardcore dog lover makes it even more special. Thank you for posting this, it made my day.
You must log in or register to reply here.