Back Shoulder Fade The Evolution of Scott Turner's Offense

The evolution of Turner’s offense


Once again Rivera has quietly made some very impactful moves to take this team up another notch. As we concluded last season, we had a QB position that finished bottom 3 in terms of production. That includes being 25th in passing YPG and 30th in total YPG. Total Intended Air Yards (yards the ball travels in the air on a pass attempt, completed or not) that across 4 starting Qbs totaled 3,686. For reference, the LOWEST IAY by any 16 game starter last year was Phillip Rivers and he totaled 3,893. Another reference…. Drew Lock started 13 games last year and he attempted 3,883. Another telling stat. IAY per attempt. Meaning, what was the average distance of attempted pass? Haskins: 6.7. Allen: 6.0. Smith: 5.1. Heinicke: 13.1! This means that clearly the eyeball test is backed up by the numbers. The difference in the ball going down field was DOUBLE when Heinicke was under center.


So, what does it all mean? Terry Mclaurin had 87 catches, followed by an RB (McKissic – 80), a TE (Thomas – 72), and RB (Gibson – 36) and finally your next WR (Cam Sims – 32). Mclaurin is clearly an animal, within this restricted passing game he still averaged 12.9 yards per reception and amassing 1118 receiving yards. The other 4 COMBINED for 1,983. At just over 3,000 yards across your top 5 receiving weapons, your top guy accounts for more than 1/3 of it. We had 1 true weapon, and had to figure out an offense around him. A lot of debate can be had about why it was so limited. Was it the game plan or the limitation of the QB position? My opinion? The system was there to go down field, we just didn’t have the horses on the field enough to make it happen.


Going back and watching the playoff game from Heinicke, the idea that this offense could look a lot more like the one that attempted 13.1 yards per pass is a very viable option. In this screen grab you can see a play that Alex Smith would have taken 10 times out of 10. 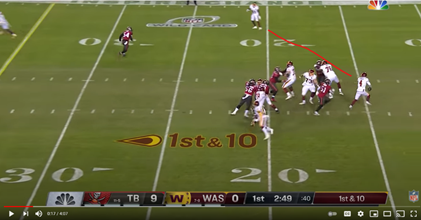 Rush comes from behind, Mckissic is wide open in the flat after going in motion. Instead Heinicke rolls right and buys time, finds Logan Thomas down the right sideline for a gain of 27. You can see the whole play here:

It starts at the :14 second mark. Instead of a ‘safe’ check down and McKissig gaining 5 – 7 yards, it’s an explosive chunk play. I personally believe these types of plays happened A LOT because of our limitations on offense. Whether that be inconsistency at the WR position across from Terry Mclaurin, a qb with limitations physically in Alex Smith, or Dwayne Haskins likely struggling to process the field well enough to get playmakers down the field with any regularity, the offense was handcuffed. I believe plays were there to be made.


On to 2021. Insert Ryan Fitzpatrick. Last year he averaged 7.8 air yards per attempt, almost 3 yards further down field than Alex Smith, out ‘winningest’ QB least season. For reference Brady led the league at 9.1 IAY per attempt. Fitz has arguably had his best years of his career over the last 3, with his last 16 game statistics looking like this: 366/561 (65%) – 4256yds – 25tds – 13ints – 95.1 passer rating. If those stats were applied to 2020, Yds would be top 10, the rest would be in or around top 20. This is not some elite level of QB play but it’s a pretty substantial upgrade. If Fitz ultimately wins the starting job and keeps it over the course of the season, the mentality of getting the ball down field should be very apparent.


The other level of this evolution is the weapons on the team. I don’t think there is an argument against the fact that we’ve completely upgraded our playmaking ability on offense. McKissic and Gibson have already shown ability as RBs, along with Thomas at TE and we all know McLaurin. Add to the mix Curtis Samuel, who played running back at OSU and ran an almost identical 40 time to McLaurin, and Humphries who is a TRUE slot WR. We’ve had our dreams of Trey Quinn being that guy, and wanting Steven Sims to be a spark plug, but it’s obvious Rivera and Turner were as frustrated with these two as we were over the last 12 months. Oh… and we haven’t even had the draft yet .


This leads me back to what I truly think the Scott Turner offense will look like going into this season. I believe the ball will be pushed down field, and I think we will see an offense where players don’t have true ‘positions.’ A ton of motion, play action, and changing the eyes of the defense. Taking Gibson and shifting him out, then moving Samuel into the backfield to force the hand of the defense and set up a matchup we want. Legit speed all over with players that can play inside, outside, or in the slot. Misdirection and borderline chaos to keep the defense guessing, not really knowing who is going to blow by them to create a big play, and a QB that appears to be ready to take that shot.